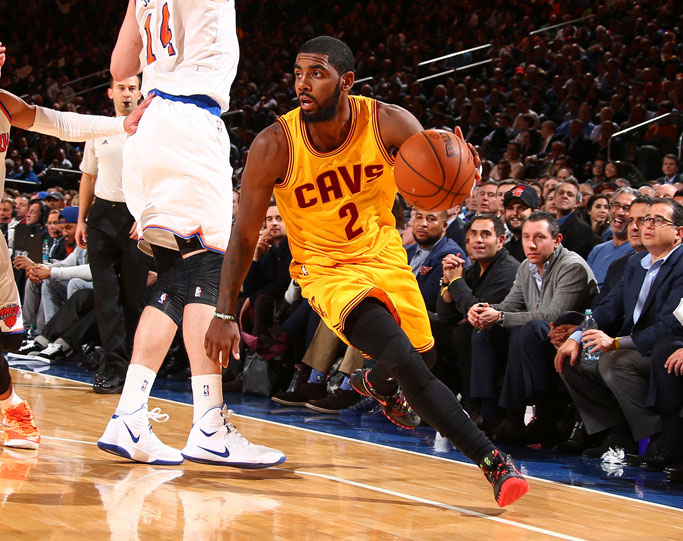 Melo vs. LeBron at Madison Square Garden is always an event, but it was Kyrie Irving who stole the show during Thursday night’s matchup between the Knicks and the Cavs. The fourth-year guard was a whirling dervish with the rock, making defenders look silly thanks to his ridiculous ball-handling ability and special knack for finishing at the rim. Uncle Drew dropped a season-high 37 including a 17-point explosion in the second quarter—dude was simply too fast and too crafty for the likes of Jose Calderon and Pablo Prigioni. With 10 seconds remaining, Kyrie hit Iman Shumpert with the Tim Hardaway double cross, drove with authority and banked in a beautiful lefty teardrop over Amar’e Stoudemire to put the Cavs up three. Melo then clanked the potential game-tying three off the back rim at the buzzer.

Speaking of Tim Hardaway, his son was doin’ work last night as Junior contributed a cool 20 points off the bench. However, the combination of Irving’s scoring, LeBron’s passing and Kevin Love’s rebounding proved to be too much for New York in the end. The Knicks were in control for much of the game, but the score was close throughout with a multitude of lead changes. LeBron and Melo were both out of sync early on; the former eventually got things going with 19 points and 12 assists, while the latter never found his shot and finished just 4-19 from the field for 9 points. Amar’e Stoudemire turned back the clock for an impressive 18-point, 9-board performance reminiscent of his Phoenix days, which included a monster poster dunk over Anderson Varejao. Quincy Acy also provided a spark for the Knicks with 15 points and 6 rebounds in the losing effort.

Kyrie detractors might point out the fact that he only had two assists, but c’mon: who really cares when he’s dropping buckets in such fashion and the team comes out on top. Meanwhile, LeBron finished with a solid statline, but people are quick to nitpick: he’s appeared to have lost some of the explosion we’re used to seeing in the past. Think he’ll get it back or is it gone forever? Does it even matter when he’s dropping dimes the way he is?

It wasn’t pretty, but the Blazers scraped by Indiana on a night when LaMarcus Aldridge scored 18 points and grabbed 13 boards to pass Mychal Thompson for third on Portland’s all-time rebounding list. Damian Lillard did Damian Lillard things en route to 23 points, 8 rebounds and 2 steals, Nicolas Batum filled up the box score with 13 points, 5 rebounds, 5 assists, 3 steals, and 2 blocks and the Blazers held the Pacers to their second-lowest scoring output of the year. Rodney Stuckey (16 points, 6 rebounds, 5 assists) and Solomon Hill (15 points, 8 rebounds) were the bright spots for an Indiana team that lacks star power without its go-to man in Paul George. Even without PG-13, the Pacers hung in there for as long as possible against one of the West’s top teams. The score was deadlocked early in the fourth quarter until Batum and Lillard stepped up and the Blazers began to pull away.

Warriors-Pelicans was billed as a matchup of early season MVP candidates Steph Curry and Anthony Davis. While Davis’ stats are more impressive, if the season ended today I think Steph would get the nod because of his team’s league-best 16-2 record. Golden State thrashed the Pels thanks to a balanced offensive attack, led by the Splash Bros, paired with a sound all-around defensive performance. The baby-faced assassin put up 19 points and 11 assists, his backcourt bud Klay Thompson posted 23 and 5, and the Warriors cruised to yet another big victory.

New Orleans jumped out to the early lead thanks to Anthony Davis’ 11 first-quarter points, but the second twelve-minute frame was a different story altogether. The Warriors went on a huge run and never looked back, getting solid contributions from Draymond Green (14 points, 14 rebounds) and Harrison Barnes (17 points, 10 rebounds). Green has been a pleasant surprise for Golden State this year, and it’ll be interesting to see what kind of raise he’ll get once the season ends. Hardly anyone stepped up for the Pelicans besides The Brow; Jrue Holiday was steady with 12 points and 8 assists, but ‘steady’ isn’t good enough to beat the NBA’s best team.