DeMar DeRozan and Kyle Lowry and Dwyane Wade stepped up in the clutch and the Sixers finally got their first road win of the season. 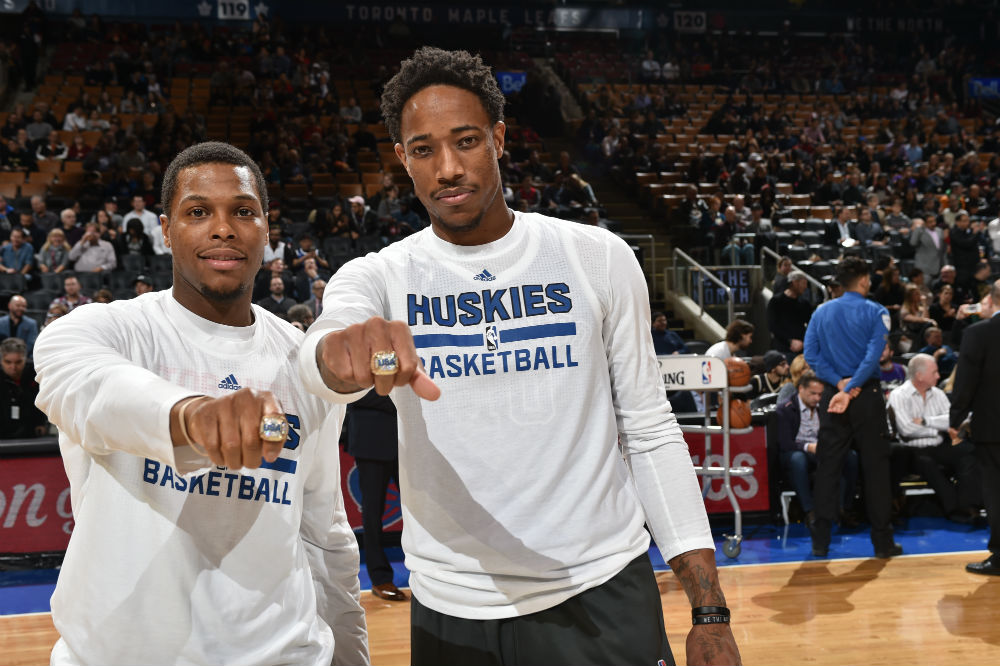 The young Wolves still have some maturing to do. After an early 12-point lead behind a quick start from Andrew Wiggins, the Raptors tied the game at 59 after two quarters. Minnesota’s Big Three took turns dominating and all finished with good numbers–29 for Zach LaVine, 25 for Wiggins and 17 and 11 for Karl-Anthony Towns.

Toronto trailed by a point with 8:46 left until, of course, DeMar DeRozan and Kyle Lowry led a 17-4 run, and a 36-21 fourth quarter score. DeRozan had 27, Lowry had 25 points and 11 dimes and Jonas Valanciunas chipped in 20 points and 11 boards. It’s the Wolves’ thirteenth straight loss in Toronto.

Things got frosty for the Nuggets in this one. They shot 7-32 from distance and bricked their final 14 attempts. They also had 27 turnovers. Yet they held a 14-point lead through the third quarter. Then Bradley Beal woke up and dropped 26 points for Washington. He and John Wall helped the Wizards hold on in the clutch.

The Grizzlies have won five in a row since losing Mike Conley to injury. Marc Gasol went for 36 points (4-6 from three) and 9 rebounds, while Damian Lillard shot only 6-18 en route to 19 points. Gasol did most of the heavy lifting, but newly signed Toney Douglas sealed the win with a pair of free-throws that gave Memphis the lead. He scored the last six points for the Grizz. He and Gasol led Memphis back from an 11-point fourth quarter deficit.

“‘We don’t win that game without him,” Grizz head coach David Fizdale said about Douglas. “Fresh off the street, but that’s who he is. He’s a bulldog.”

The last time the Sixers won on the road? January 20, 2016 against the Magic. It was their sixth win of the season. They already have five Ws this year, which is progress, albeit slow progress. Ersan Ilyasova scored 23 to lead five Sixers in double-digits. Philly had 27 assists on 39 field goals.

Anthony Davis had 26 and 11 for New Orleans. Langston Galloway added 19, but no one else scored more than 8 points for the Pels. They shot 7-25 and have now lost four in a row.

Without Derrick Favors, Rodney Hood, Gordon Hayward and George Hill in uniform, the Warriors were up by as many as 25. But the Jazz fought back and outscored the Dubs by 12 in the second half. They were down five in the middle of the fourth. Then Kevin Durant got back-to-back dunks and Golden State hung on for the win. Stephen Curry scored 26, Durant had 21.

Without their four best players, the Jazz scored by committee. A career-best 21 for Joe Ingles, 20 and 17 rebounds for Rudy Gobert and 19 from Shelvin Mack wasn’t enough to overcome the Warriors.

The Bulls handed the Spurs their first road loss of the season, ending the silver and black’s 13-game winning streak. Chicago was up for the whole game, at one point by 18. This game was close, however. After a Pau Gasol three-ball, the Bulls had only a 4-point advantage. The Bulls hung on with free-throws, despite a highlight-filled 24 points (8 rebounds and 5 assists)  from Kawhi Leonard. Dwyane Wade had 20 points, 5 rebounds and 5 assists and Rajon Rondo had 12 points, 10 ‘bounds and 9 helpers.

Kawhi gets another dunk, beating Jimmy Butler then finishing over Robin Lopez. https://t.co/HUnCiaHNYo