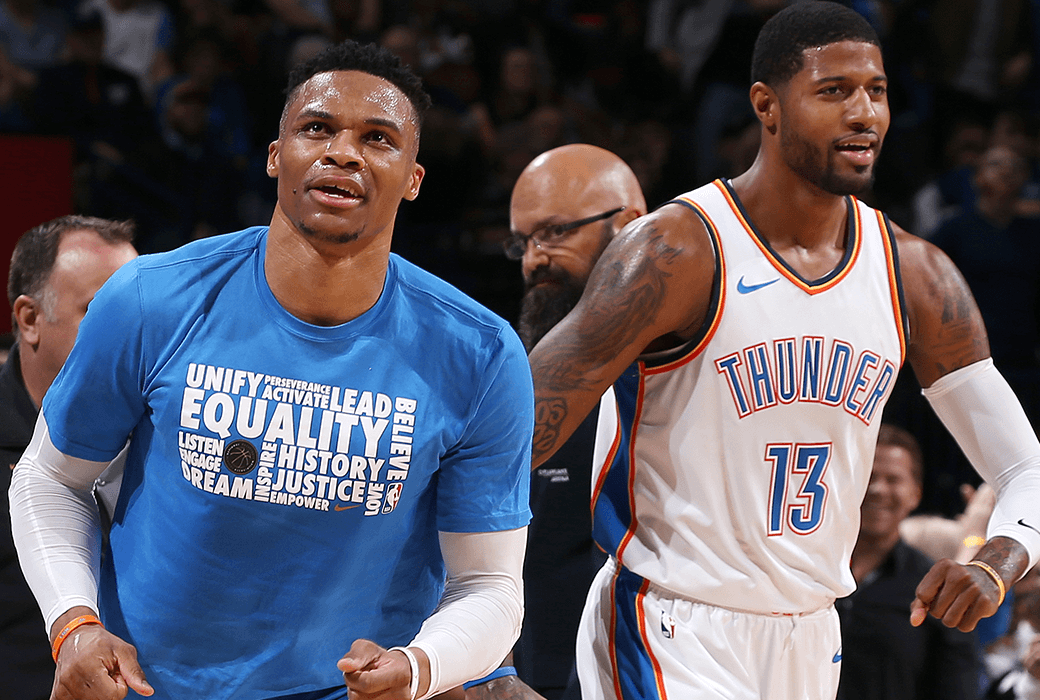 The Cavaliers rode a 66-point first half performance to deliver the Knicks a franchise-worst 17th straight loss.

Kadeem Allen scored a career-high 25 points on 10-for-16 shooting for New York. Collin Sexton led the Cavs with 20 points and Kevin Love put up 14 points and nine boards in just 16 minutes of work.

DeAndre Jordan’s reaction to Mario’s poster tho 😭 (via @BleacherReport) pic.twitter.com/70TsCXa3L5

With 68 combined points, the duo surpassed Vince Carter/Jason Kidd and Michael Jordan/Scottie Pippen for the highest scoring output between two teammates with triple-doubles — the previous record was 56. They were also the first duo to both score at least 20 points.

Westbrook’s 10th consecutive triple-double moved him past Wilt Chamberlain for the League record.

Nikola Jokic had 23 points and 12 rebounds and Malik Beasley added 20 as the Nuggets scored 35 first quarter points and never looked back.

Kawhi Leonard (30 points) knocked down the go-ahead shot with four seconds to go as the Raptors won their fifth game in a row. Marc Gasol had 16 points and six boards in 22 minutes in his first home game in Toronto.

Joe Harris and Allen Crabbe combined for 46 points and 13-for-18 shooting from deep.

who forgot to teach Marc Gasol the pregame intro routine? 😂 (via @TSN_Sports) pic.twitter.com/tc43wezOg9

30 PTS | Game-Winner#KawhiLeonard improves the @Raptors to 42-16 on the season! #WeTheNorth pic.twitter.com/fHbvjTKmsE

Giannis Antetokounmpo stuffed the stat sheet with 29 points, 17 rebounds, eight dimes and three blocks as the Bucks held onto first place in the Eastern Conference. His plus-minus of plus-21 in 35 minutes was a team-best

Zach LaVine and Lauri Markkanen combined for 47 points, nearly half of Chicago’s points.

James Harden knocked down a 30-foot 3 with 52 seconds to go to extend his 30-point streak to 30 games as he finished the night with 31 points, eight rebounds, seven dimes and five steals.

James Harden nails the 30-footer to hit 31 and keep the streak alive. (via @nbatv) pic.twitter.com/W8pLBZtast

The two sides were knotted up 53-53 late in the second quarter, but a 34-11 run by Minnesota put the game out of reach for Los Angeles, who were only able to cut the deficit back down to four in the final period.

Bench stars came up big for both sides as Derrick Rose scored 22 in 25 minutes for the Timberwolves and Lou Williams had 45 points on 13-for-25 shooting for the Clippers. Williams’ 45 was the most points by a bench player since JR Smith in 2009.

Derrick Rose can, and will, always beat the clock. ⏰ pic.twitter.com/7ZjvAVjeFc

Blake Griffin (31 points, nine rebounds, nine assists) and Andre Drummond (32 points, 17 rebounds, four steals) took over as the Pistons raced out to a quick lead and held on the rest of the way.

Bradley Beal scored 32 for the Wizards.

Kemba Walker scored 34 points, but the Hornets were only able to shoot 32.2 percent from the field and 17.5 percent from behind the arc as seven Pacers chipped in at least eight points. Myles Turner led Indiana with 18 points, three steals and three blocks.