TJ McConnell beat the Knicks at the buzzer, Isaiah Thomas went off in the fourth quarter & more from Wednesday. 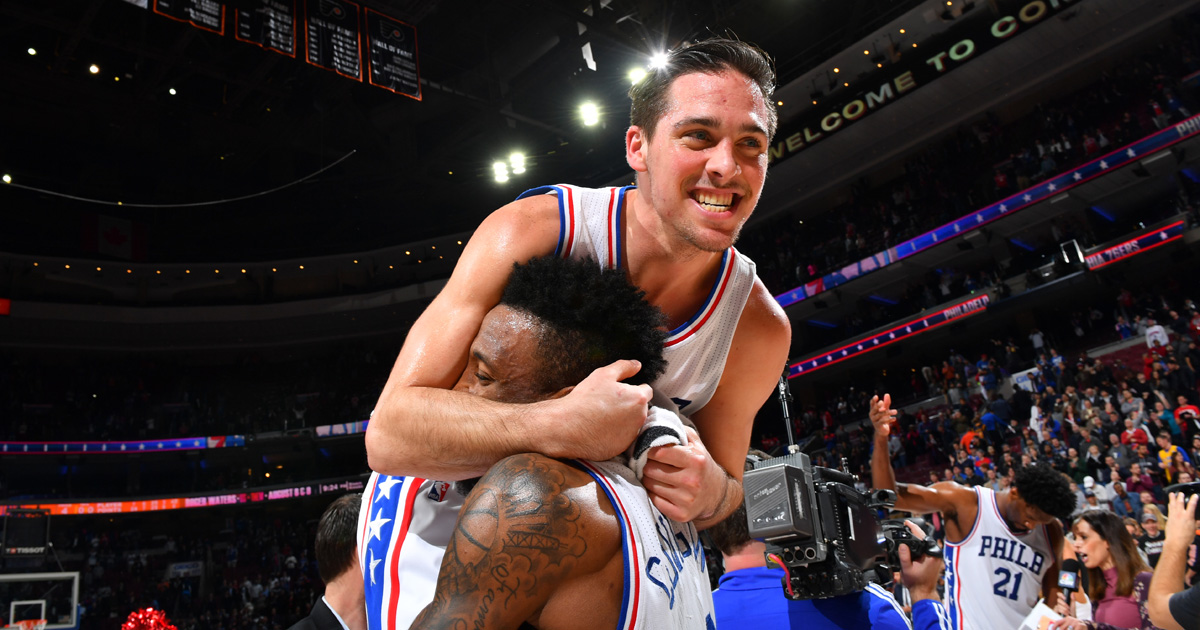 Up 10 with 2:29 left in the game, the Knicks had to have felt pretty good about their chances. But Joel Embiid, who had 21 points and a career-best 14 rebounds, responded with eight quick points to bring Philly in position to steal the game. Kristaps Porzingis air-balled a corner trey, which led to a transition opportunity for the Sixers with six seconds left. TJ McConnell got the ball on the baseline, stopped, turned and faded away before sinking the game-winning shot.

Embiid said after the game that the 76ers are thinking about getting to the playoffs. They’re actually just seven games out. Anything is possible?

Very nice win for OKC, who never trailed through all 48 minutes. Russell Westbrook had his 18th triple-double of the season (24 points, 13 rebounds, 12 assists), matching last year’s total in half as many games. The Thunder destroyed the Grizzlies 53-39 on the boards and 27-9 in fast break points.

Houston dropped a dud on the second half of a back-to-back. To Houston’s credit, though, it actually was the first time all year that the Rockets have lost on the second half of a back-to-back. Karl-Anthony Towns had 23 points, 18 rebounds, 5 assists and 3 blocks to lead the Wolves, who blew open the game with a 21-point lead in the fourth quarter. Ricky Rubio tied a career-best 17 assists, and it looks like his struggles this season could be behind him.

No doubt this was a chippy ballgame. Both teams on the second half of a back-to-back. Boston won the rebounding battle, 45-44—something that’s been a major issue for them recently. Isaiah Thomas put up 20 of his 38 points in the fourth quarter. He’s been an absolute assassin in the fourth this season. Boston outscored the Wiz by 11 in the final quarter, and that proved to be the difference.

After the game, things got heated between Jae Crowder and John Wall, which ultimately resulted Crowder poking Wall on the nose, and Wall tapping Crowder on the cheek.

January has been good to the Clippers. They’ve gone 5-0 this month and could get Blake Griffin back in a couple weeks. Orlando has been the exact opposite. They’ve dropped six of their last seven and have really struggled to put the ball in the basket. Still, they were tied in the fourth quarter before L.A. eventually pulled away. DeAndre Jordan grabbed 20 rebounds, scored 10 points and blocked 3 shots to lead the Clippers.

A snowstorm in Portland caused travel problems for both teams as they tied to arrive in Rip City after playing on Tuesday. The Cavs looked like they left their game on the plane, though, as LeBron James, Kyrie Irving and Kevin Love combined to shoot under 33 percent. Five of Cleveland’s 10 losses have come on zero days rest on the road. CJ McCollum led Portland with 27 points—his seventh consecutive 25+ point night. He’s the first Blazer since Clyde Drexler in ’87 to accomplish the feat.