It was a Merry Christmas indeed for Russ and Co. 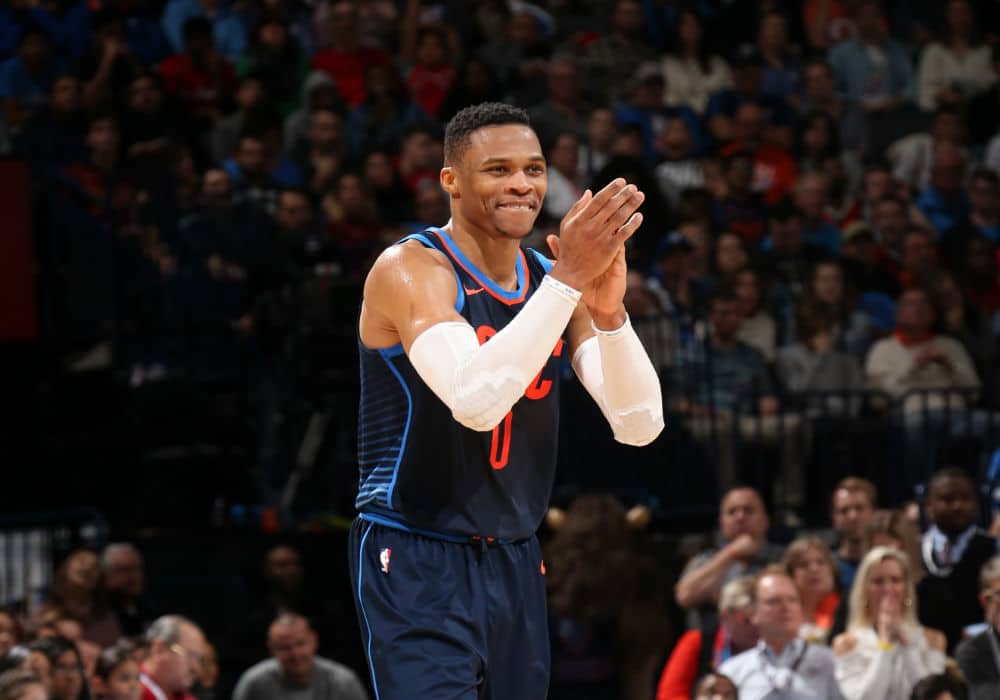 In a matchup of the NBA’s two young unicorns, Joel Embiid stole the show with a 25-point, 16-rebound performance to lead Philly to a W at MSG. The win snapped the 76ers’ five-game losing streak. Embiid and Kristaps Porzingis (22 points, 7 rebounds) both played well but Embiid’s late corner three put the Knicks away.

KP wasn’t even the best Knick on the floor, as Enes Kanter (31 points, 22 rebounds) dominated the paint and the glass in his most impressive game in a Knicks uniform. The Knicks shot just 40 percent from the field and everyone other than Courtney Lee (20 points) really struggled from three.

JJ Redick, who has been limited by injury for the last couple of weeks, made a bunch of big shots down the stretch en route to an efficient 24 points on 10 shots. Rookie of the Year candidate Ben Simmons wasn’t able to get going on offense but his steal and fast break jam in the fourth quarter swung momentum back in Philly’s favor.

And he just did it again! Just might be the dagger 🍪 (via @NBA) pic.twitter.com/8z1qAlMwGy

The annual Finals rematch was without a few key stars — mainly Steph Curry and Isaiah Thomas — but it was still a close one right to the end. Kevin Love (31 points, 18 rebounds) led the way for the Cavs as LeBron was uncharacteristically sloppy with the ball, committing seven turnovers. He was also blocked on a few late-game drives by Kevin Durant that featured a lot of hard contact, yet no foul calls.

KD was incredible, dropping 25 to go with seven boards and five blocks. He and Klay Thompson (24 points, 7 rebounds) were the Warriors’ big scorers in a game mostly decided by big defensive stands as opposed to sparkling offensive plays. Cleveland shot just 32 percent from the field but made 15 threes to stick around.

Another back-and-forth affair on a Christmas filled with close games. Washington led for much of the first three quarters behind its dominant backcourt of John Wall (21 points, 14 assists) and Bradley Beal (25 points, 8 rebounds) before the Celtics took a five-point lead midway through the final frame on a Kyrie triple.

Highlights time! Bradley Beal led the way in our #NBAXmas win with 25 points. Here are his buckets. 🐼

Then Wall, Beal and Kelly Oubre Jr combined for a 12-0 run that regained the lead for the Wizards and put this one out of reach. Oubre added 16 points off the bench. Kyrie and Jayson Tatum (20 points each) got their scoring done and the Celtics shot over 48 percent as a team, but they committed 16 turnovers which allowed the Wiz to take 12 more field goals attempts and 11 more free throws. That would be the difference.

It seems like the Thunder is finally getting into a groove. After 30 or so games of up-and-down play filled with confusing losses and big wins, OKC is beginning to look like the star-powered team Sam Presti put together on paper this summer. Russ (31 points, 6 rebounds, 11 assists), Paul George (24 points) and Melo (20 points) were on the same page offensively and Steven Adams (15 points, 10 rebounds) did his thing down low.

On the other side, James Harden (29 points on 7-of-18 shooting, 8 rebounds, 14 assists) got his points but did so in a much less efficient way than Mike D’Antoni would like. With the Thunder shooting over 54 percent from the field, just Harden to that output was a win. Trevor Ariza and Eric Gordon (20 points each) helped bear the scoring burden but it wasn’t enough and the Rockets had no answer for the Thunder’s Big Three.

L.A. didn’t have both Lonzo Ball and Brandon Ingram due to injury, forcing Kyle Kuzma (31 points in 41 minutes) into the starting lineup and the unquestioned No. 1 role on offense. He did about as good as possible considering that Minnesota threw Taj Gibson on him most of the day. Still, it wasn’t enough as the Lakers kept having to come back from deficits and, eventually, ran out of gas in the fourth quarter. Julius Randle was effective off the bench, scoring 16 points and grabbing seven rebounds in 19 minutes.

11-0 run, that’s quite a chunk!
Courtesy of this KAT thunderous dunk! pic.twitter.com/ihqGiJLVTs

As for Thibs’ squad, the concern about the elevated minutes of guys like Jimmy Butler and Karl-Anthony Towns is still there but the on-court issues from the start of the season have worked themselves out on both ends of the floor. Five Timberwolves scored 16+ points, with Butler (23 points, 8 assists) and Towns (21 points, 10 rebounds) serving as the focal points. Each played 40 or minutes too though, which is a worry for Minnesota as the postseason draws closer. For now, things are pretty good for the Northwest Division’s leading team.