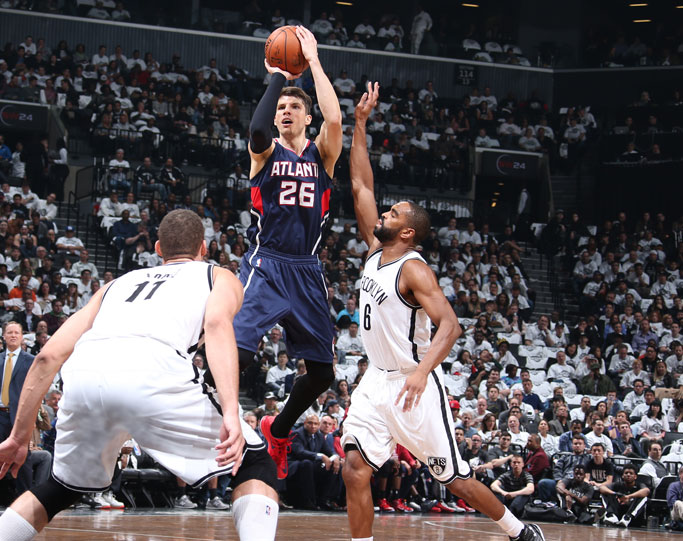 The Hawks had this thing won from the tip last night. They opened up a 36-23 edge after one, and pulled away with a 41-point third quarter.

It seemed like every hand was a hot one for Atlanta. Paul Millsap (9-of-15 shooting) led the way with 25, but DeMarre Carroll (20 points), Kyle Korver (6 threes, 20 points) and Al Horford (18 points) were tremendous as well. Jeff Teague went scoreless, but tallied 13 assists and just 1 turnover in 24 minutes. He was excellent as the facilitator; his Hawks shot better than 50 percent from the floor and 40 percent from deep.

The Nets actually battled the early deficit nicely, but folded in the second half. Deron Williams committed two sloppy turnovers in the opening minutes, and the team had just one bucket halfway through the third quarter. Bad misses allowed the Hawks to move quickly on the other end, and the game got out of hand in a flash.

Basically, it’s like all of the Hawks’ amazingness and all of the Nets’ laziness that had been bottled up for five and a half games was unleashed at once. Not a fair fight.

Brook Lopez led Brooklyn with 19 in the loss, and Joe Johnson added 12—disappointing after an inspiring first half from the former Hawk.

The Nets’ roster is mostly locked in for next year. Lopez is due for a new deal, but the Nets seem likely to fork over whatever it takes to keep him. Thaddeus Young will be a free agent, too, and his status is less clear. Johnson’s deal expires in a year, and Williams’ might, too (he has a $22.3M player option for the ’16-17 season). Brooklyn saw promising development from a few young dudes this season in Mason Plumlee, Bojan Bogdanovic and Markel Brown. They’ll be flipping their draft pick with none other than the Hawks themselves.

Meanwhile, Atlanta will draw the Wizards in Round 2. Washington got some time off following their sweep of the Raptors, and figure to come out with serious confidence. That won’t matter if the Hawks play as well as they did last night.