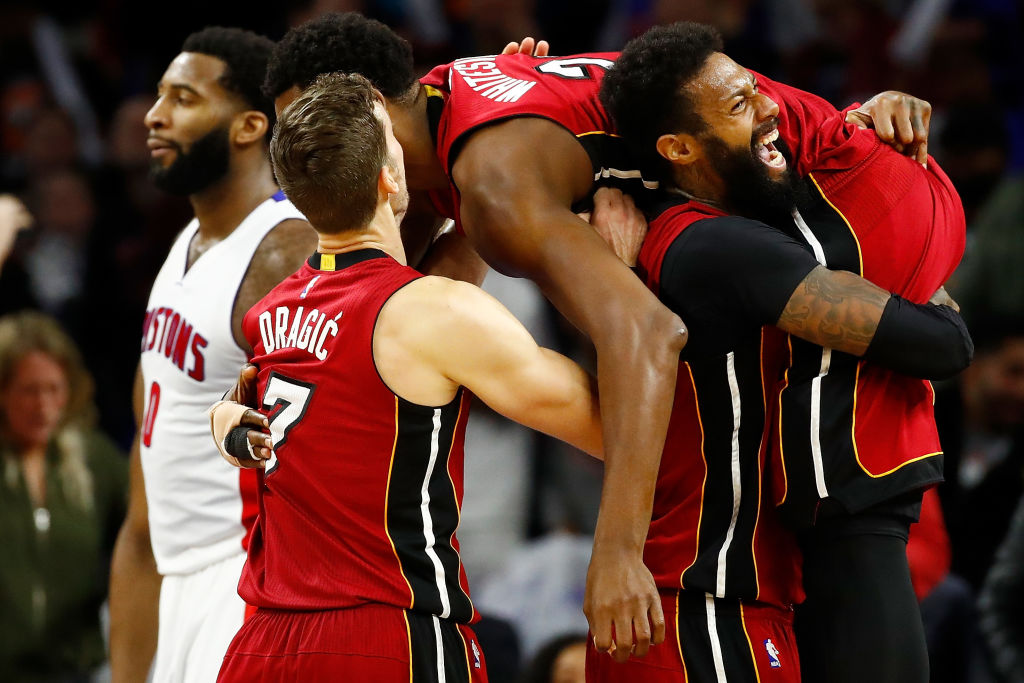 Karl-Anthony Towns scored 37 points and Ricky Rubio hit three free throws with under four seconds left in regulation, giving Minnesota the edge in a come-from-behind victory. Paul George, who went off for 37 points, was none too pleased with his teammates after the game.

“To be honest, man, I don’t think I got the ball enough down the stretch,” George said. “I was pissed. That’s really the only way to sum it up. This locker room isn’t pissed off enough. There’s no urgency or winning pride right now.”

Tony Snell‘s career-high 26 points led Milwaukee to a crucial W over Charlotte, adding a game of separation between themselves and Indiana for the sixth seed. The Hornets, on the other hand, are looking to have missed their window for playoff contention. Despite solid double-digit scoring efforts from Kemba Walker, Frank Kaminsky, and Michael Kidd-Gilchrist, Marvin Williams and Nicolas Batum combined for a meager 11 points.

The Heat just barely managed to hold onto the eighth seed, eking out a W behind a game-high 28 points from Goran Dragic. James Johnson destroyed Marcus Morris with a poster-of-the-year candidate, while Hassan Whiteside played hero with the game-winning tip-in.

The Hawks ran into Phoenix at just the right time. Atlanta entered Tuesday having dropped each of their last seven, a streak they happily snapped against the tanking Suns. Dennis Schroder led all scorers with 27 points, and Ersan lyasova (filling in for the injured Paul Millsap) added 18.

This one wasn’t pretty- neither team managed to shoot over 42.9%- but Philadelphia emerged victorious in a battle of rebuilding teams. Dario Saric and Robert Covington had 23 and 21 points, respectively, while Brook Lopez dropped 26 for Brooklyn.

The Dubs obtained their eighth straight victory thanks to 32 points for Stephen Curry, 25 for Klay Thompson, and 19p/9r from Draymond Green. James Harden did his thing, recording an impressive 24p/13a/11r triple-double, while Clint Capela added 21. The Rockets showed grit, battling back from Golden State’s 37-point first quarter, but the damage had been done early.

That Jusuf Nurkic trade is looking pretty good right about now. Playing against his former team, the Bosnian Beast went for a career-high 33 points with 16 rebounds. Between Nurkic’s line with C.J. McCollum‘s 39 points, and the Blazers had little trouble putting this one away in the second half (outscoring Denver 56-49). With the win, Portland claimed the eighth seed of the Western Conference.

John Wall scored 34 points with 14 dimes, to go with 16 points apiece from Bradley Beal and Otto Porter Jr. in Washington’s division-clinching road win. In addition to clinching the Southeast division, the Wizards are still in the mix for the first seed, trailing Boston by two games. Despite the loss, L.A. managed to shoot a combined 50.6% from the field, featuring 28 points from D’Angelo Russell and 22 from Jordan Clarkson.