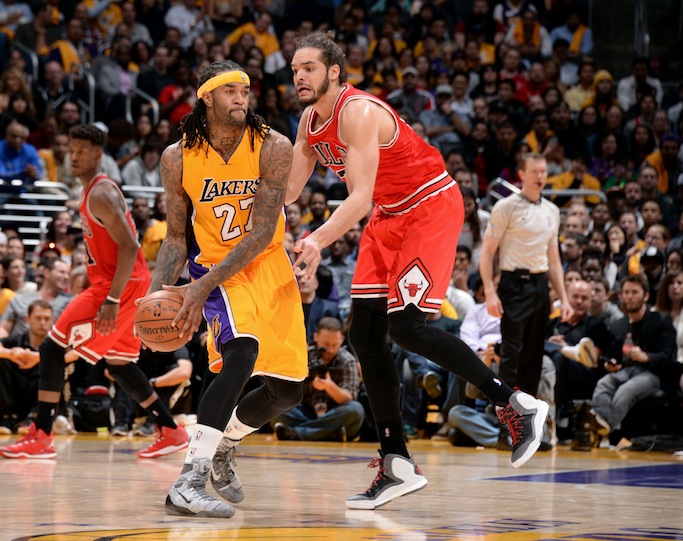 The Magic never led. Victor Oladipo led the way for the struggling Magic with 21 points and 5 rebounds. Elfrid Payton finished with 15 points and 6 assists. Meanwhile, Nikola Vucevic continues to churn out double-doubles; he went for 17 points and 14 boards. Orlando has now lost seven straight.

Pacers-Knicks was neck-and-neck until Indiana ratcheted up its play in the second half. The Pacers outscored New York 35-12 in the third quarter.

The Knicks scored just 33 second half points on 14-42 shooting. Carmelo Anthony dropped 12 of his 18 points within the first nine minutes of the game. ‘Melo and his team failed to regain any semblance of an offense as the game wore on. Indiana was clicking on all cylinders in the final two quarters. Rodney Stuckey (22 points), Roy Hibbert (18 points, 10 rebounds) and David West (10 points, 6 boards, 6 assists) were instrumental in the win. The Pacers outscored the Knicks 50-26 in the paint to earn the victory — something that’s been hard to come by recently — Indiana had lost eight of its previous nine outings.

The Grizzlies flat out embarrassed Denver thanks to lockdown defense and exceptional frontcourt play. Zach Randolph (15 points, 17 rebounds) and Marc Gasol (10 points, 7 rebounds, 2 blocks) did damage down low per usual. All five Memphis starters attained double figures on a night that felt like revenge for the home team; the Nuggets beat the Grizz 114-85 on January 3rd.

This one was nowhere near close. Memphis, without Mike Conley, held Denver to 33 percent shooting overall including 8 percent (2-22) from three. The Grizzlies led 50-35 at the half and extended their rout in the second half. Alonzo Gee had a powerful put-back:

The second game of TNT’s double-header was easily Thursday night’s most entertaining affair.

The Lakers led Chicago 96-87 with two minutes remaining in regulation. The Bulls fought all the way back thanks to a flurry of points from newly named all-star Jimmy Butler (35 points, 7 rebounds, 3 steals). Pau Gasol (20 points, 10 rebounds, 6 dimes) hit the final bucket to send the game to its first overtime. Shortly thereafter, Jordan Hill (26 points, 12 rebounds) hit a jumper to force the second OT, which the inexperienced Lakers surprisingly controlled. Los Angeles’ lineup doesn’t exactly blow you away on paper, but the backcourt combo of Jordan Clarkson (18 points, 2 steals, 2 blocks) and Wayne Ellington (23 points) attacked the rim and hit clutch jumpers down the stretch. Carlos Boozer chipped in with 16 points and 8 rebounds against his former team. Derrick Rose (17 points, 6 assists) played well but disappeared in the two overtimes.