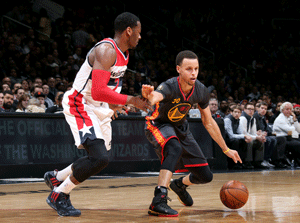 First things first, get well soon Derrick Rose. Rooting for you, as always.

Nice seeing ya back on the court, Stephen Curry. Very, very nice. In the Dubs’ win last night, Curry returned after missing his last game and scored 32 points on 11-18 shooting to go with 8 assists and 0 turnovers—this is his eleventh 30-point game this season (good for fifth in the NBA).

The match-up between the Warriors and Wizards remained close throughout, with no lead exceeding 9 points. The Wiz opened the game 9-0 before Golden State got some shots to fall. Despite shooting 53.2 percent from the field and five players in double-figures including double-doubles for Marcin Gortat (16 points, 11 boards) and John Wall (16 points, 11 assists), the Wizards couldn’t complete the win at home. They committed 26 turnovers compared to the Warriors’ 9 as they dropped their fourth straight. Paul Pierce led his team with 25, and he’s the star in this interesting Vine of the week…

The Prince is back at the Palace, folks.

But his return and the two double-doubles from Andre Drummond (17 points, 10 boards) and Greg Monroe (12 points, 14 boards) couldn’t keep the visiting Cavaliers from getting a road win.

LeBron James finished with 19 points, 7 rebounds, and 11 assists. With the assist below, he passed Scottie Pippen to become the forward with the most career assists in NBA history.

Kevin Love finished with 24 points and 9 rebounds. All of his points came from 3-point land as he tied his career-high.

The Detroit Pistons had a 9-point lead heading into the locker room at halftime and widened the gap to 14 at the start of the third quarter. After that, it ended up being a #3rdQofDoom for the Pistons as the Cavs outscored ‘em 24-12 by the end of the quarter to take a 3-point lead. Although the Pistons attempted at a fourth quarter comeback, Cleveland held on for its third consecutive victory.

Serge Ibaka led all scorers with 23 points to complement his 10 boards, and OKC never trailed at home against the visiting Indiana Pacers. The Thunder were up by 6 points at halftime after leading by double-digits earlier in the second quarter. By the midway point of the fourth, they were up by as many as 23. The Thunder are streaking.

OKC sits in the eighth spot in the West’s standings, a game and a half behind San Antonio (who’ve lost three straight) and two and half games ahead of New Orleans (who are without Anthony Davis).

Despite a heated exchange between coaches and players in Dallas, the Mavericks still came out with the victory over the visiting Toronto Raptors last night. Dirk Nowitzki finished with 18 points and 9 rebounds, and Monta Ellis led all scorers with 20 to hand the Raps their third straight loss.

The Raptors led by 3 at the end of the third quarter, but the Mavs went on a 12-4 run to open the fourth and regain the lead. They ended up outscoring Toronto 25-15 in the final period to claim the win for good.