The Warriors stormed back to win behind Stephen Curry's 40 points on Thursday. 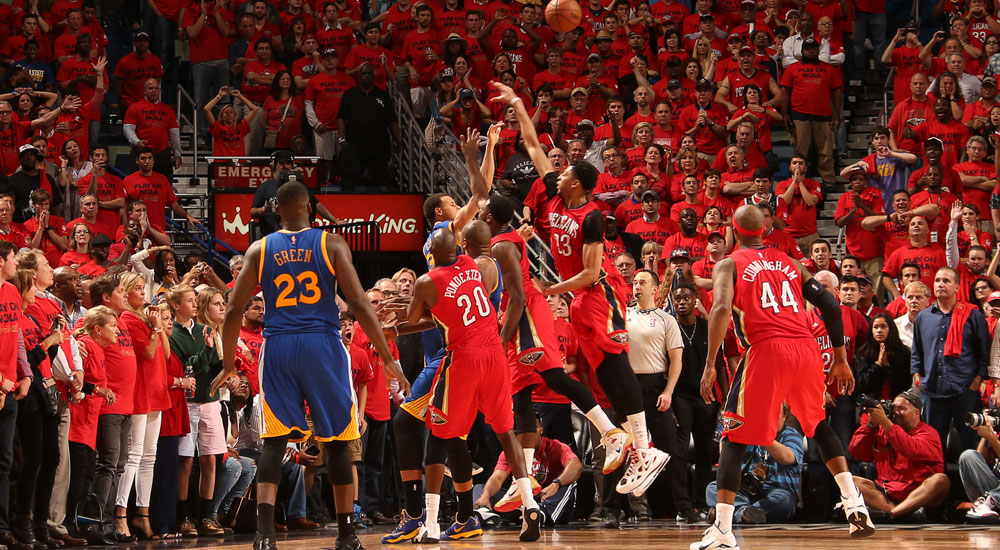 Kevin Love has officially arrived in the postseason. On a night where Kyrie Irving struggled to find his shot, Love provided all the support LeBron James and the Cleveland Cavaliers needed to secure a Game 3 victory over the Boston Celtics. Leading 98-93 with 30 seconds remaining, Love connected on one of his six threes for the night in front of the Boston bench and it proved to be the dagger.

James finished with game-highs of 31 points and 11 rebounds while Love totaled 23 and 9 to help Cleveland to a 3-0 series lead with the 103-95 win. Despite physical defense and a balanced offensive attack throughout the contest, Boston simply had no answer for James and Love down the stretch.

“The first game I had to get the nerves out of the way,” Kevin Love said postgame. “The second game I was in foul trouble. But tonight, I just found my rhythm. I had a lot of open shots where my teammates were able to find me. It wasn’t just me, I felt like a lot of guys had a stretch of great plays—Tristan Thompson was unbelievable. He was unbelievable in Game 2 as well. LeBron made some huge plays, Ky, JR, throughout our entire lineup. I’ve been saying that all year, we have guys who can make plays. It was a big game for us here on the road to go up 3-0.”

JR Smith added 15 points for the Cavaliers and Tristan Thompson finished with 12 and 7. Evan Turner paced the Celtics with 19 points to go along with 8 assists and 8 rebounds while being tasked with guarding LeBron for most of the night. Avery Bradley added 18 while Jae Crowder chipped in 16. The Cavaliers now have an opportunity to sweep on Sunday in Boston.

The Bulls snatched a Game 3 that jolted, staggered and stunned all night. The Bucks went on a 22-4 run in the second quarter; the Bulls pulled within two before halftime. Derrick Rose hit five 3s and pieced together one of the most dominant second halfs of the season; he laid writhing on the baseline after a Giannis Antetokounmpo foul, and split what would have been game-winning free throws. Every time the Bucks shed their image as an innocuous upstart, the Bulls roared back behind runs by Rose or Jimmy Butler (and at one point, Tony Snell); every time the Bulls showed signs of being a polished Eastern Conference contender, they stumbled to a dispiriting defensive lapse.

The Bucks killed a 10-point Bulls lead in the last 2:50 of regulation, paced by Khris Middleton 3s on consecutive frantic possessions. Middleton also hit a floater to put the Bucks up 1 with 10 seconds to play, but Rose answered by storming down the floor, shaking Middleton and Michael Carter-Williams and drawing contact from Antetokounmpo. He crumpled in pain after the play, but eventually got up and, after clanking the first free throw, tied the game.

The first overtime was a slow burning affair that went scoreless in the final 2:29. The last possessions for both teams were frighteningly disorganized: Jimmy Butler hoisted a heavily contested 3 after the Bulls struggled to find any semblance of spacing, while the Bucks actually tried to win the game on an O.J. Mayo 15-footer. The Bulls cruised in the second OT period, though, to take a commanding 3-0 lead and deflate the energy mounting in the Bradley Center.

Rose pieced together one of the most dominant games of his career, finishing with 34 points, five rebounds, eight assists and three steals. Butler added 24 points on 20 shots, while the Bucks were lead by Antetokounmpo’s 25 points. The Bulls’ spacing was a concern without Mirotic, but the team still shot a blistering 42 percent from behind the arc. After 53 minutes from Butler and a season-high 48 from Rose, Saturday’s Game 4 in Milwaukee doesn’t guarantee a sweep by any means.

Ryan Anderson was looking downright Dirkish, New Orleans had an awesome home crowd, and, for 42 minutes, life was good for the Pelicans.

Then Steph Curry heated up, Draymond Green started doing Draymond Green stuff, and, suddenly, life wasn’t so good. A 23-8 Warriors run over roughly six minutes pulled them within three points toward the end of regulation, and, to nobody’s surprise, Curry then evened the score with his wildest triple yet in a season full of them. The Pelicans showed some life in overtime, but by then the game belonged to the favorites.

After a shaky start, Curry was off the charts in the final eleven minutes. In all, he hit 10/29 shots (7/18 threes) for 40 points. I found myself naturally pulling for the No. 8 Pelicans throughout the game, so watching Curry find his stride in the fourth was absolutely terrifying — there was just no fucking way Golden State was going to lose once he caught fire.

Green hit 5/11 shots for 12 points, but it was his work on the glass that stood out. He managed 17 boards, 7 of them coming on the offensive glass. The Warriors as a whole collected 22 of their own rebounds. Klay Thompson knocked down 9/21 shots on his way to 28 points; his scoring total has increased in each game so far this series. Harrison Barnes chipped in 11 and 7, and had a sweet put-back jam to shift momentum with 3:34 left.

Plenty of dudes played well for the Dubs, and indeed it was an amazing win. But New Orleans blew this one. Even with Curry breathing down their necks, the Pelicans were just a a couple of patient, smart, successful possessions away from a win. They couldn’t deliver.

Anthony Davis posted 29 and 15, but didn’t touch the ball enough late in regulation and forced a tough shot in the closing moments of overtime, a miss that iced the game. Anderson was scorching hot, knocking down 10/14 shots on his way to 26, but inexplicably wasn’t a part of the team’s gameplan when things went south. Eric Gordon shot just 2/10, and, without looking Davis’ way, missed an open three with 24 seconds remaining in overtime.

In an underdog sort of way, the Pelicans seemed to build some momentum while dropping Games 1 and 2 in Golden State. That’s now out the window and then some. Game 4 is slated for Saturday night.