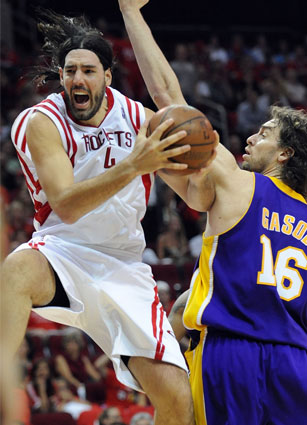 I wasn’t planning on the basketball Gods answering my requests so seriously. The Lakers, man. What can I say besides, where is the focus? You don’t come out like that on your opponents homefloor, on the same floor where you got pummeled not even a week ago. Not when you’re seeking the championship. Not when the Nuggets are up next.

Could these Houston Rockets really do this?

I can’t hate them. I just can’t. They really have no business being here. They’ve got no business at all being in a seven game series with the Lakers with Yao Ming sitting on the bench. It’s sort of foolish to think of. What they don’t have in bodies, size or personnel, they’ve more than made up for in heart.

Brooks came out with his red jacket on during the press conference. You’d best believe he’ll be wearing that to STAPLES come Sunday.

The Lakers were just out of it last night. Pau and Andrew disappointed me greatly. Carl Landry was such a pleasant surprise for the Rockets. Scola was determined to get the W and refused to let anyone outwork him. Brooks weaved his way around the court for 26 points and Battier made Kobe take 27 shots to get his 32 points.

A positive for the Lakers was Jordan Farmar finally getting into a groove. The negative was Derek Fisher scoring only 2 points on the night on 1-7 shooting.

Can I just mention Landry’s aggressiveness again? He was great.

Hearing that Brooks got stopped at STAPLES because someone thought he was too small to “go where the players go”, was just bad. Unless you live under a rock, if you don’t know who Aaron Brooks is by now, shame on you. He may be tiny but he has been spectacular this postseason.

The Rockets were simply better over 48 minutes because they came ready to play. Pregame Battier’s message to the team was, “Never give up. Never give in. Fight for the full 48.” His teammates listened while the Lakers only managed to wake up at the half.

Game 7 could be interesting. The Lakers should come out and crush them, but this entire series has been a series of should-haves for the Lakers.

And then to the earlier game; Rashard Lewis and Courtney Lee made my night as they finally figured out how successful they can be when they are the aggressors and go to the hoop. The three-point shot was not falling for the Magic and Dwight was unable to score at will so it was the rookie in the facemask who provided a boost in the fourth quarter and who brought the energy that Lewis would pick up on as he led the Magic back from 10 down.

Dwight had 23 points and 22 rebounds which is a monster line, but tell me this: Does the impressiveness of his 22 rebounds lessen when I remind you that Rajon Rondo finished with 19 points, 16 rebounds and 6 assists? Yes, 16 rebounds for the point guard. Yes, this is getting a bit absurd.

It’s also pretty crazy that the Magic won a game where Hedo finished 3-13 and JJ Redick went 0-7 from the floor.

Another guy that struggled yesterday was Ray Allen. Just 2-11, including 0-7 from three, I’m just waiting for him to bust out in Game 7 and save the day.

The Celtics scored just 13 points in the fourth last night. Dwight was just 5-12 from the line. 10 of his rebounds were offensive. The Magic shot just 36% from the floor. There were so many ugly stats in that game, but in the fourth it was fun to watch the Magic claw their way back. When House gave the hard foul on Lee and ended up swiping him across his facemask, I couldn’t help but love how his teammates stood up for him and let House and Co. know it wasn’t okay.

Also enjoyed seeing Rafer’s joy over a jumpball call. He goes over and kisses the ref on the head.

Thought it was telling that after the lashing out at SVG, Dwight felt he needed to speak with two people: his coach and captain Jameer Nelson. Lisa Salters had a nice interview with Nelson during the game (and I’m almost never a fan of sideline interviews), that showed his role as a leader on the team. The C’s are without KG, but going from Jameer to Rafer has got to have it’s effect in terms of leadership on the court, no slight to Rafer.

Okay, its time for me to sleep!

Sunday is going to be crazy. Two Game 7’s. Get jacked. Now, the question is, what the hell are we going to do for the next two nights?