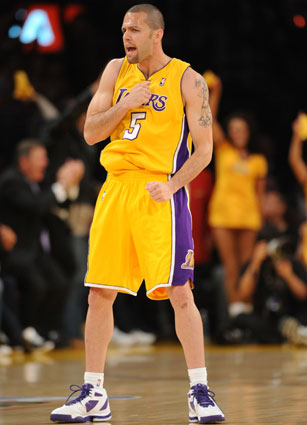 I know, you’re all going to tell me this is what the Lakers are supposed to do against a Yao-less Rockets squad. You’re right, of course, but it was still nice to see some of the guys get themselves back on track in this one. Seven L.A. players in double figures. My favorite things were seeing Jordan Farmar and Andrew Bynum appear to get into the groove again.

It was crazy how quickly the game turned into a b-l-o-w-o-u-t. I was watching with a few friends and every time I looked up, the lead had stretched. It was kind of wild. You know what else is kind of wild? That I was watching the game at a bar. Me, watching the Lakers in a playoff game with other people. I’m learning to be more calm during games. Also learning how to respect the fact that some people will never see the brilliance of Kobe or the heart that is Lamar Odom and that’s okay.

Crazy how the Lakers came out so focused this game. Will they be able to close this thing out in Houston?

Now, about the Magic. I’m a SVG fan, but why was Dwight Howard on the floor/getting the ball in the final seconds when they were down by three? That just didn’t make sense. And the Magic got screwed out of a possession on that shot that did not hit the rim and was out of bounds off of the Celtics. Still, they gave up key rebounds when they needed them and gave Boston the room they needed to get the W.

So, Boston and L.A. are each up, 3-2 while Cleveland waits for their ECF opponent and Denver/Dallas will try to get through tonight without any more family members getting offended and anyone else getting escorted out of the arena or ejected from the game. Absolute craziness going on in that series. I’m not a fan of any of it. You’re playing basketball, playoff basketball there is no need of this foolishness.

Cuban shouldn’t have said anything to Kenyon’s mother. Kenyon needs to broaden his vocabulary if he wants to jaw at Cuban. Lala needs to calm down so she can stay in her seat and doesn’t miss her guy dropping 41 (although it was a loss).

And Dirk? Poor Dirk needs to pick up some pointers on things to look for in his next girl. That whole mess made my head spin and also made me feel horrible for him. What a disaster. Props to him for playing well in the face of personal adversity. Can you even imagine?

Despite all of the subplots, sidestories and drama, I’m jacked for the game. Think Denver has it, or will the Mavs steal another W? I think the Nuggets will finish things off tonight.

“If I’ve hurt anybody or if I’ve done any harm to anybody, please forgive me because my intentions were just harmless,”

Did you hear about the father who wrote to the NBA office demanding an apology from Glen Davis after his son lost his hat and became a part of the many replays we’ve seen of Baby running up the court after draining the game-winning buzzer-beater? To that I can only say,  wake up! Your kid is sitting courtside at an NBA playoff game and was basically, unintentionally, a part of the action. He was not harmed in any way and gets a crazy story and memory to take home with him. Had he been injured, I could perhaps understand the concern, but even then if you sit courtside, you take that risk. Ask Jason Kidd and his son TJ’s broken collarbone. Things happen. Davis meant no harm.

I still smile when I see him running back to his teammates to celebrate his big shot.

I also was happy to see Lamar Odom on the court and looking okay last night. Boston and LA winning. It feels like all is right in the NBA world again.

Okay. Prediction for tonight: Dallas or Denver? Any ejections? Any more drama?