The Warriors picked up their 10th straight win while the defending champs cruised past the Heat. 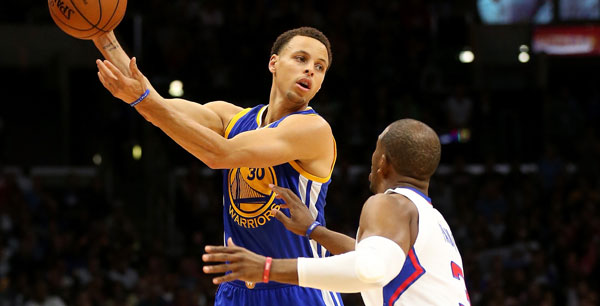 In a battle between two teams fighting for their playoff lives, the Nets picked up a crucial victory thanks to Brook Lopez (24 points, 11 rebounds, 2 blocks), Joe Johnson (21 points, 6 rebounds, 4 assists) and Alan Anderson (20 points, 3-4 on 3-pointers) all reaching the 20-point plateau. This game, though, had a wild start. Behind four quick points from Roy Hibbert (7 points, 3 rebounds, 3 blocks), the Pacers jumped out to a 7-0 lead just over two minutes into the game. Brooklyn responded by sprinting out to a 33-8 run to finish off the quarter and hold a 18-point lead going into the second quarter. Then it was the Pacers turn to bounce back as they went on a 37-17 run of their own to take a 52-50 lead a few minutes before halftime. The second half was played much closer as neither team led by more than 10 at any point. After George Hill (28 points, 6 rebounds) made a reverse layup with 2:11 to go in the game, Johnson came through in the clutch again with a step back jumper and deep three to give his team an eight-point lead with 15.4 seconds remaining. The Nets have now won four consecutive games and are half a game ahead of the Celtics for the No. 8 seed.

The Pistons pulled off the upset against the top-seeded team in the East because of Reggie Jackson (12 points, 11 assists) and Andre Drummond (22 points, 13 rebounds, 8-11 from the field) continuing to establish great chemistry. When Jackson came after from OKC, he didn’t let the game come to him and also didn’t know his role in the starting lineup. However, recently, Jackson has started to thrive and use picks from Andre Drummond to really open the entire team’s offense. Jackson did most of his damage right off the bat as his team started the game red hot as they hit 10 of their first 11 shots while leading 25-14 just over six minutes into the game. Behind strong play from Al Horford (16 points, 5 rebounds, 8-10 from the field), the Hawks quickly bounced back as the Pistons came back down to Earth and Detroit’s lead shrunk to 52-50 by halftime. After a back-and-forth third quarter, the Pistons still only led by a slim margin, 76-72. Similar to his 11 points in 65 seconds against the Bucks, Tuesday night Kyle Korver (11 points, 3-4 on 3-pointers) rattled off nine points  on three of five possessions midway through the third, keeping the Hawks in the game. Thabo Sefolosha (19 points) had the touch all night and the shot the ball in an impressive manner. A Drummond dunk, Jackson trey and Tayshaun Prince (9 points, 2 steals) dunk to start the fourth quarter allowed the Pistons to go on a 7-0 run and retain the lead the rest of the way. Joel Anthony (5 points, 4 blocks) only played 16 minutes but made the most of his time by blocking four shots. While Detroit swatted six shots on the night, Atlanta had no blocks. The Hawks have now gone 3-5 in their last eight games.

The NBA Finals rematch ended with another Spurs win as this San Antonio team just can’t help but heat up right as the playoffs approach. Riding a three-game winning streak going into this nationally-televised game, Kawhi Leonard (22 points, 9 rebounds, 4 steals, 2 blocks, +23) and Tony Parker (16 points, 5 assists) have been the two Spurs playing exceptionally well the past month or so. That trend continued Tuesday night as these two had 30 points by the end of the third quarter when the Spurs held a double-digit lead. San Antonio would extend that lead to 21 points in the fourth and cruise the rest of the way. Leonard’s defense was on another level against the Heat, especially in the third quarter. His long arms, big hands and quick footwork makes it seemingly impossible to create any type of offense when he is between you and the basket. Dwyane Wade (15 points, 5 rebounds) and Goran Dragic (19 points, 6-6 on free throws) did everything in their power to keep Miami in the game, but they needed 34 shots to score 34 points. The Spurs have now gone 14-3 in their last 17 games and look like one of the teams to beat (again) in the West.

It doesn’t matter whether this team is on the road or at home, has all their starters playing or has a decent shooting night. These Warriors simply find ways to win and that was proven correct as they won their 10th straight victory. With no Draymond Green on the night, Stephen Curry (27 points, 4 assists) and Klay Thompson (25 points, 8 rebounds) took even more control of the offense and thrived in the process. Curry even pulled off the play of the game as Chris Paul (27 points, 9 assists) fell to the floor because of Curry’s fancy footwork and smooth moves. The other Splash Brother in Thompson has developed such a quick release this season that it is almost impossible to close out on his shots if you’re not a few feet from him when he catches a pass. For the Clippers, Blake Griffin (40 points, 12 rebounds, 5 assists, 3 blocks) established himself in the interior early, making two layups and a dunk in the first six minutes of the first quarter. He kept attacking the paint as the game moved on and even knocked down a handful of midrange jumpers. CP3 kept feeding the hot hand while getting his own. The Clippers, though, just couldn’t go a full 48 minutes without being victims to one of Golden State’s dangerous runs. Tuesday night, it came at the start of the fourth quarter rather than the third. After Paul and Griffin combined to score 18 of the Clippers’ final 21 points of the third quarter, their team held an 88-82 lead going into the final 12 minutes of the game. That lead wouldn’t last as the Warriors used a quick 9-0 run in just over two minutes to turn a six-point deficit into a three-point lead. Andre Iguodala (6 points, 7 assists), Curry and Thompson would make 7-7 free throws in the final 1:10 to seal the win. Golden State now has 61 wins on the year and an absurd .824 winning percentage.