The T-Wolves earned a win in Kevin Garnett's emotional return to the Target Center on a night jam-packed with NBA action. 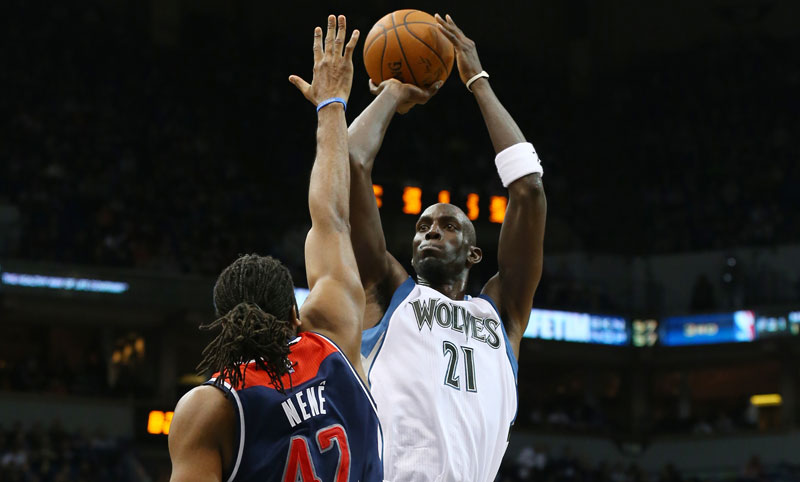 Victor Oladipo missed a three-pointer at the buzzer, and the Magic fell to the Heat at home for its 40th loss on the season.

Miami shot just 6-31 from the 3-point line but still managed a win. Two of those shots from beyond the arc came from Henry Walker (formerly Bill Walker) within the final 30 seconds — including the 3-pointer to send the game to overtime. Hassan Whiteside (15 points, 13 rebounds, 3 blocks), Luol Deng (21 points, 7 rebounds) and Dwyane Wade (18 points, 6 assists, 3 steals) led the way for the Bosh-less Heat.

Orlando was up by eight with less than a minute left in regulation, and the Heat worked fast. In the loss, Nikola Vucevic finished with 26 and 8, Victor Oladipo had 13 and 13 and Tobias Harris dropped 12 and 8. The Magic shot just 18-31 from the free throw line.

Evan Turner (10 points, 10 assists, 12 rebounds) notched his first career triple-double and the Celtics cruised to victory against the lowly Knicks.

New York’s roster is truly a disaster. It’s a wonder they even got to 94. Their big men carried the load; Andrea Bargnani posted 17 points, 6 boards and 2 blocks, and Jason Smith put up 14 and 10.

Young ATLien Dennis Schröder’s childhood hero was Rajon Rondo. And in fact, the 21-year-old German even has a little bit of Rondo’s game in him, as well.

Schröder came off the bench to score 17 points Wednesday night, but Rondo was not active to face off against his basketball doppelgänger — he was serving a suspension for “conduct detrimental to the team” (AKA he pissed off Rick Carlisle). The Hawks’ entire starting five all attained double figures (surprise, surprise), and they steamrolled the Mavs at home. Paul Millsap (15 points, 8 rebounds), Al Horford (11 points, 8 rebounds, 6 assists) and Kyle Korver (16 points, 6 rebounds, 2 blocks) impressed. Yeah … this team’s prettay, prettay good.

Once again, the Bulls must adjust to basketball without Derrick Rose.

Chicago couldn’t figure it out Wednesday night against the Hornets, who snapped a five-game losing streak thanks to Michael Kidd-Gilchrist (18 points, 12 rebounds), Mo Williams (17 points) and Al Jefferson (16 points, 7 rebounds). Pau Gasol had a helluva game with 25 points/13 boards and Jimmy Butler posted 14 points, 7 rebounds, 5 assists and 2 steals in a losing effort. The Bulls will try to bounce back when they host the T-Wolves on Friday.

The Rockets broke it open in the fourth quarter with a 15-1 run in the first game of ESPN’s Wednesday night double-header. Los Angeles climbed its way back but couldn’t quite pull off the comeback. Corey Brewer scored 13 of his 20 points in that final period, and Houston earned its first W against the Clippers since March 2013.

James Harden was magnificent per usual with 21 points and 10 assists. Donatas Motiejunas has been a pleasant surprise for H-Town this season and continued his career year with 18 points and 9 boards. Terrence Jones filled it up for 14 points, 8 rebounds and 5 blocks, and Trevor Ariza finished with 17 points. CP3 dropped 22 points and dished out 14 dimes, DeAndre Jordan went for 22 points and 19 rebounds and Jamal Crawford shot 10-17 for 24 points off the bench.

Michael Carter-Williams scored 7 points, handed out 8 assists and notched 2 steals in 18 minutes of play against his former team. The Bucks shot 53.7% from the floor en route to a rout of the Sixers. Milwaukee led Philadelphia 61-32 at the half. John Henson (21 points, 9 rebounds, 3 blocks, 2 steals) and Khris Middleton (19 points, 5 rebounds) were instrumental in the win.

Kevin Garnett (5 points, 8 rebounds, 2 blocks in 19 minutes) made his highly anticipated return to the Target Center, and fittingly, the T-Wolves grabbed a convincing win in the process. It was an emotional night — fans praised the 2003-04 NBA MVP throughout the night and welcomed him home with open arms.

Kevin Martin (28 points), Nikola Pekovic (15 points, 13 boards) and Andrew Wiggins (19 points) were tremendous for Minnesota in the 20-point blowout. John Wall finished with 10 assists but scored only 5 points. Washington, as a whole, failed to get much of anything going offensively. The Wizards have now lost five straight games.

Quincy Pondexter shot 9-13 from the floor for a career high 25 points, and the Pelicans won once again without Anthony Davis. Tyreke Evans added 15 and 11, Omer Asik went for 12 and 13 and Dante Cunningham finished with 13 and 7 as New Orleans moved to within two games of Oklahoma City for the last playoff spot in the West.

The Pels eked out the win despite a whopping 20 turnovers. NOLA counteracted an inability to handle the rock by hitting 11 3-pointers, shooting over 50 percent on all field goals and outrebounding Brooklyn. Joe Johnson (21 points, 10 rebounds) was a bright spot for the Nets. So was this 360:

The Suns snapped a five-game losing streak in a 14-point victory over Denver.

Phoenix’ fresh face, Brandon Knight, posted 19 and 6 including two important 3-balls late. A total of six Suns reached double figures in scoring. Notably, Eric Bledsoe posted an 18/8/6 statline, Marcus Morris had 12/9 and PJ Tucker put up 12/8. The Suns are fighting for a playoff spot. They’ll face the Thunder — currently sitting in the eighth spot in the West — on Thursday night.

Jordan Clarkson shot 62.5 percent from the floor for a career-high 22 points and the Lakers went on a late run to pull off a three-point win over Utah. He’s turning into a nice player for Los Angeles; however, that might not be saying much considering the lack of talent on the rest of the squad. But LA did show up Wednesday night, so credit where credit is due. Wayne Ellington chipped in with 15 points and 10 rebounds, Jordan Hill added 16 points and Ed Davis contributed 12 points and 9 boards.

Rudy Gobert (16 points, 14 rebounds), Gordon Hayward (20 points) and Derrick Favors (18 points, 9 boards) were the top performers for the Jazz, who gave up bucket after bucket down the stretch, allowing the Lakers to take control.

Cousins, Karl and Zach Randolph all received technical fouls in a gritty, high-emotion affair. Jason Thompson double-doubled with 10 points and 11 rebounds, and Ben McLemore scored 16 including this aesthetically pleasing throw-down:

The second game of ESPN’s double-header was a little less competitive than the first. Wes Matthews exploded for 31 points, Damian Lillard stuffed the statsheet with 18/7/5, and LaMarcus Aldridge did damage with 11/13 as the Blazers took care of business at home.

The defending champs have now lost four straight. The Spurs’ defense — usually a strong suit — has been awful recently. Tim Duncan (20 points, 8 rebounds), Kawhi Leonard (14 points, 8 boards, 4 steals) and Danny Green (17 points, 5 rebounds) had nice games, but San Antonio simply couldn’t get stops. Meanwhile, Portland ended a bit of a skid by earning its first victory since All-Star Weekend. Matthews’ shooting was at the forefront of the win, but many players contributed; six Blazers finished with double digits in points.