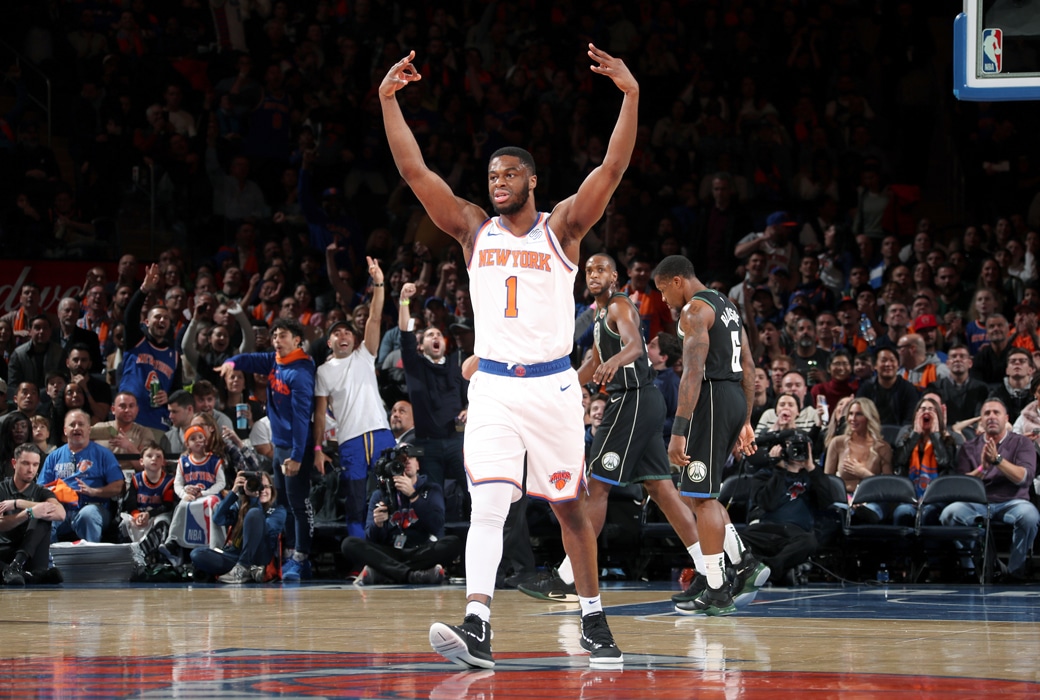 New York erased a 14-point fourth-quarter deficit to defeat one of the League’s hottest teams in overtime.

Emmanuel Mudiay (28 points, 7 dimes) hit big shot after big shot and Kevin Knox dropped a career-high 26 points, but the pervading talk about this game will be about Mario Hezonja’s dunk and step-over on Giannis Antetokounmpo.

When pressed about the incident after the game, Giannis told reporters, “I’m going to punch him in his nuts next time.” He was dead serious.

THAT STAREDOWN 😳 (via @nyknicks) pic.twitter.com/zKFqlknhrr

Giannis on Hezonja stepping over him: "I'm going to punch him next time."

Stephen Curry returned after an 11-game absence, but Golden State could not get its offense going in this one.

The Warriors shot a combined 6-26 from three and turned the ball over 15 times as they trailed for most of the game.

Blake Griffin (26 points, 5 assists) and Andre Drummond (16 points, 19 boards) led the way for Detroit, who has now won five games in a row.

Washington picked up a much-needed win after getting completely blown out in Philly the night before.

Brooklyn, who lost in a double-OT heartbreaker on Friday, has now dropped six games in a row.

Even without Kyle Lowry, Toronto was able to come away with a win in Cleveland.

Kawhi Leonard had 34 points and 9 boards to lead the Raptors to their eighth straight win. The Cavs, on the other hand, are now on a four-game skid.

Good luck stopping Kawhi on his way to the cup (via @NBA) pic.twitter.com/2PxahJFOVB

Lauri Markkanen returned after missing the first 23 games of the season, but Chicago still lost in blowout fashion in Houston.

The Rockets outscored the Bulls by 16 in the first quarter and never looked back. As usual, James Harden led the way for Houston, finishing with 30 points, 7 dimes and 6 boards.

Chicago has now lost six games in a row.

Boston is once again starting to resemble a rising superpower, having won four of their last five games.

In by far his best game of the season, Gordon Hayward came off the bench to score 30 points (on 16 shots) with 9 rebounds and 8 assists.

The Celtics were whipping the ball around the court, recording 30 assists for the fifth time in their last seven games.

That pass by Marcus Smart tho… (via @NBA) pic.twitter.com/3zP5PSkeDN

Bookending the night with another highly entertaining game, the Pacers and Kings went back-and-forth with 25 lead changes.

Willie Cauley-Stein (17 points, 13 boards) gave the Kings the lead for good with a put-back dunk with 16 seconds remaining.

CLUTCH! Willie Cauley-Stein cleans up the glass 🔥 (via @NBA) pic.twitter.com/xEo0Np9Vaf