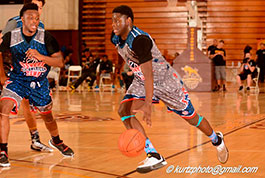 Over 120 of the country’s highly touted HS prospects traveled by automobile or airplane to Southern California for the 13th Annual Pangos All-American Camp on the campus of California State University, Dominguez Hills, in Carson, CA.

“This national camp has served as a coming out party for many top and past HS All-Americans as well as a showcase for national sleepers,” said camp director and founder, Dinos Trigonis.

An array of talent has come through the PAACamp in the past 13 years. Alumni include John Wall, James Harden, Anthony Davis and Russell Westbrook along with many others.

Campers were evaluated individually all weekend through 5-on-5 games and then the top campers were selected to participate in the “Cream of the Crop” Top 30 and 60 All-Star Games.

SLAM was in attendance to check out some hoop. Here are some of the top performers from this past weekend:

Washington showed his insane dribbling ability and flare that comes with New York-bred guards and put on a show this whole weekend when he was on the court. He matched up well with other top guards and tried to put everyone who was trying to stick him in a blender. His vision was superb as he threw numerous no-look dimes to teammates all weekend. Said he’s heard comparisons of John Stockton, and no disrespect to the legend, but the flare and handle reminded me of Sebastian Telfair.

Young possesses a high IQ and understanding of the game. He’s very unselfish and gets others involved from the moment the ball is tipped. He’s deadly in the open court and can get to the rack and finish or dish off to a teammate for an easy bucket. Young is also excellent in pick-and-roll situations and a good shooter from distance. He’ll also lock up after he buries one in your face.

Freedman has, if not already, made a case as being one of the top guards on the West Coast. He’s a pass-first guard that makes those around him better. His IQ is second to none and his ability to see the play before it happens is amazing. Freedman is an excellent ball hander who plays north and south and counters off defenders’ mistakes. He’s also good at reading the pick and roll and can knock down the 3-ball consistently.

As expected, Ferguson showed why his nickname is 2K with this video-game-like dunk as he prepared to play his first game on Friday night. And that’s just one of the many highlights of the weekend from Ferguson—just peep the recap from BallIsLife. He also showed his ability shooting from the mid-range to behind the arc.

Ethan is stepping out of the little brother shadow and is showing that his older brother, Stevie Thompson Jr., who’s headed to Oregon State, isn’t the only one that’s smoother than the other side of the pillow. He makes getting to the rim look effortless, plays at his own speed and finishes well through contact. He also allows the game to come to him and is very deadly from the 3-point line. If he’s left open on a kick out, there’s no doubt that it’s going in; If the defender goes under the screen, by the time he recovers, the sharp shooter is trotting back after hearing the sound of the ball swish through the net.

The future Arizona Wildcat is going to be a problem once he gets to the Pac-12. Leaf’s skill is second to none and he does it all—from shooting the 3-ball, defending, attacking slower defenders. He’s equipped with a nonstop motor and really outplays his opponents.

Preston continues to be a special prospect coming out of his class. His size and skillset is unique and gives him the advantage to overpower smaller guards down low or take true centers off the dribble. And he also works well from mid-range to 3-point land with his jumper.

Only one of three players in the class of 2019, Stanley proved that age was just a number. With DeMar Derozan-like comparisons, he shined amongst the campers and was the only one in his class to be selected to participate in the Top 60 game where he dropped 17 points earning MVP honors. Stanley got into the teeth of defenses for buckets and soared in transition for double-clutching layups or effortless dunks.

Heron caught his first victim in transition for the facial just a few minutes after camp games began. He then became a fan favorite to spectators and everyone watched to see who was next to get dunked on. This lefty is just a flat-out bucket getter and deadly in the open court. He gets to the cup at will and is finishes well through contact. Heron’s also very unselfish with excellent court vision. His tremendous play earned Co-MVP honors, respectively.

Spellman is built like an offensive lineman with a bag of post moves. He uses every ounce on that 270-pound frame to muscle defenders in the post as one defender fell victim to a two-dribble drop step that let to a ferocious dunk. The Villanova commit is also very versatile, as he likes to play both inside and out and extend to as far as the 3-point line.

Despite sitting out on the final day due to a shoulder injury, Morris was successful on the court both nights he suited up. He’s another high-motor kid that doesn’t stop till the clock hits zero and never takes a play off. Runs run to rim extremely well, is effective around the basket and finishes with authority when is dished the rock. His offensive game is coming along, but his awareness and ability to alter shots creates offense.

Another elite player to come from the Seattle area and Jamal Crawford’s Alma Mater is Cunliffe. He has a high IQ and understanding of the game that allows him to be successful offensively. Can create for himself off the dribble or let it fly from behind the arc. The future Arizona State Sun Devil also takes pride in guarding whomever regardless of size or position.

This big man is a problem on both ends of the floor and going to be a problem throughout his career. Defensively, it’s nearly impossible for guards to get a shot over that outstretched wingspan, while offensively his soft touch allows him to finish well around the rim. After corralling a rebound off a missed shot, he showed he could handle the rock like a guard as he hit a defender with an in-n-out dribble at half court before traveling the length of the floor for the dunk. He moves great for someone his size and comes with a nice form on his jump shot after nailing a few trail 3s.

Peters was amongst the discussion of elite point guards to step through the doors this weekend. He has a bounce to his step and killer handle that allows him to blow past defenders or break ‘em down. He also has a nice jump shot and is effective from all spots on the floor.

Alkins joined Mustapha Heron as Co-MVP of the camp although he left the Top 30 game at halftime and headed to the airport to catch his flight back to New York. Both with similar build and game, Alkins was considered the top performer all weekend. Another scoring machine that got to the basket whenever he wanted to and used his size against his defenders to his advantage.

Lee is another stretch four who knows nothing less than 110 percent who can jump out of the gym. He’s dominant going to the left and likes to shoot that 15-footer from the top of the key.

Kegler is versatile and is great at reading defenses in the open court to put himself in a perfect position to score. He uses his lanky build to pull up from mid-range to attacking the rim when a smaller guard is placed in front of him.

Ponds was another New York guard who showed out during his time in California. The lefty reads pick-and-roll situations good and slices through defenses in the paint. He’s also deadly from 3-point range.

Aiken held his own when matched up against other top guards despite his height. He has great handle and is deadly in the open court. He’s also very quick turning the corner off the pick and roll.