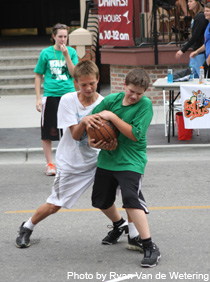 Nothing’s perfect, but this is as close as it can get.

BAM Jam Boise, in just its third year, has become one of northwest America’s top 3-on-3 basketball tournaments. And it didn’t happen magically. Without the seemingly endless hours and dedication from the tournament’s co-directors – brothers Vince and Clint Hordeman – combined with a northwest community’s passion for America’s top urban game, SLAMonline wouldn’t be mentioning BAM Jam today.

For those who don’t believe in fate, or the power of dreaming big, check those

thoughts for a moment. We’re hoping on a plane – maybe two or three, depending on where you’re living – and flying 41,000-feet high ‘til we reach Boise, ID, possibly America’s most overlooked basketball town.

The Hordeman brothers knew it would happen. Just not this soon. Three years ago, when the first BAM Jam took place in downtown Boise (also referred to as BoDo) very few people could’ve imagined hoopers flocking to Boise to compete in an outdoor 3-on-3 basketball tournament.

But it became reality. Summer BAM Jam 2010 featured 1,000 players, 220 teams, representing 10 states. It wasn’t magic that brought everyone together in a town better known for its football and good ‘ole boy potato joints than its basketball scene.

You probably know the formula. Passion, plus Focus, plus Love. Sprinkle on some pertinent social media presence (BAM Jam’s on Facebook as well as Twitter), full support from the downtown’s local businesses and government, and incredible showing of volunteer help, and year three of the summer tournament was poised to take over the City of Trees.

SLAMonline had things to see for itself.

The closest I’ve been to Idaho was 12 summers ago, when, on a family vacation, I visited Yellowstone National Park in Montana. This was a good old fashioned, two-week driving trip that looped 5,500-plus miles through the American west. Like Yellowstone, we caught plenty of national monuments along the way, but overlooked Idaho completely.

Twelve years later, this time flying out west, I arrived in Boise on a Thursday afternoon. I was welcomed by 100-degree dry heat and a quick pickup by Vince himself. (Just as a point of comparison, Vince drove me back at my hotel before I normally could hail a cab in New York City.)

The downtown Boise is trendy, full of business, movie theaters and restaurants. It’s not Los Angeles, but it’s definitely not tiny Paris, IL, either. Mountains in almost every direction. People raft down the Boise River, flanked by the wooded Julia Davis Park and the (surprisingly beautiful) Boise State campus.

Boise is a growing town of over 200,000 residents, not one of whom, I’m already convinced, possesses an ounce of rudeness in his or her body. Longtime Idaho resident, Matt Bauscher, meets me at the hotel. His basketball story is as inspiring as any I’ve heard or read.

Nary a school recruited him out of high school, so he spent his first season of college ball at Spokane Community College. He played well enough to walk on at Boise State the following year. After graduation, he earned a contract with GasTerra Flames in the Dutch Basketball League, which won the national championship in Holland this past May. The Flames have a shot at the Euroleague (basketball’s top competition outside of the NBA) this season, but before Bausch gets back to Holland, he’s helping fund-raise for the BAM Jam (proceeds benefiting local charities)… and helping me feel at home.

Not a problem because this is what Bausch does best.

The next morning, I buy

They All Had Fun

In the end, you got to remember your motivation behind doing what you do. The motivation is obvious for everyone involved with BAM Jam: To provide a venue for everyone to have fun.

In just over 24 hours, 9,000 people came through to watch or play in the tournament. I spot young girls in full cheer-leading getup walking the streets with some kind of bird mascot wearing one of the largest foam cowboy hats I’ve ever seen.

Volunteers man shooting contests, monitor all the courts and pass out Powerade and water to spectators and fans.

Looking to my right, a third grader pulls an incredible cross-over on his defender and blow right past to the cup. He’s so excited to have de-laced his man, though, that his layup goes up and over the backboard.

The busy sidewalks are littered with players wearing anything from homemade Superman jerseys, tie-died cut-offs. One court further down features men over 40, who don’t have the same constant kinetic energy of the third graders, but a little more accuracy and range on their jump shots.

Local restaurants have patrons packing their patios, eating and drinking while watching the games. Look down the street, and you’ll see at least four games in every direction.

It’s hard to imagine this is only BAM Jam’s third summer.

In the middle of the afternoon, games are halted for a three-point contest and a dunk contest. These

events easily drew the largest crowd around the Idaho Trust center court. Fans cheered on the shooters, counting the baskets as they swished through the cotton. They jumped off their seats in the 95-degree mid-day heat when a skinny kid called Sheridan nearly hit his head on the rim completing a reverse cram from the baseline.

A Mexican restaurant – only five months into its new digs on 8th Street – was quickly becoming a favorite, handing out $2 tacos. Across the street, snow cones were being endlessly dispensed from the window of a truck, set-up near one of the women’s elite courts.

As a hoops fan, I was in awe. My expectations, though I tried to check those at the JFK Airport terminal, were surpassed in every sense.

Every person I met – and it seems like I was able to meet every basketball person in Boise – was the definition of kind and generous. We laughed, relaxed and enjoyed the life BAM Jam was bringing to the community.

As Team Jacob (apparently named after the Twilight character Jake Black) was taking home a deciding lead in the women’s elite championship game, I realized this 3-on-3 tournament was much more than a basketball event. It was much more than something that would bring immense proceeds to local charities. It was more than a great way to have fun and stay fit.

It showed the vibrancy of the fantastic Boise community. Most of all, it reinforced an overall dwindling American dream: That if you dream for something and put all your passion into it, you will achieve. That’s what the BAM Jam directors have accomplished in an incredibly short amount of time.

During my short trip to the Treasure Valley, I made several great friendships, watched some fantastic (as well as not-so-fantastic) hoops, and gained a new appreciation for outdoor summer basketball.

Most of all, though, I was able to witness what seemed like the meteoric rise of BAM Jam Boise into the upper stratosphere of 3-on-3 basketball tournaments. But miracles don’t make events like this happen. It’s the love for the game in Boise, ID.

Don’t be surprised if BAM Jam is mentioned in the same breathe as the nation’s top summer tournaments within the next five years, if it isn’t already.

But you don’t have to believe me. See for yourself in the (very, very amateur) video montage I culled from my stay this past weekend in Boise. The enthusiasm can’t be overlooked. Enjoy!