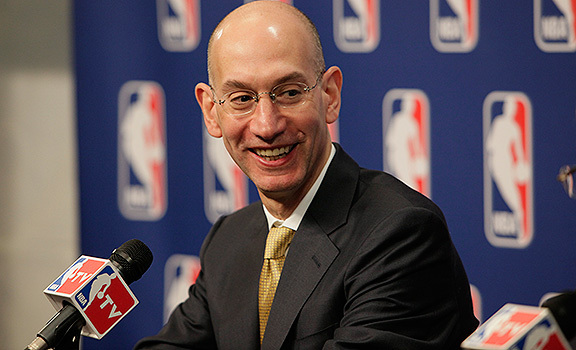 NBA Commissioner Adam Silver sat down with Bloomberg for a wide-ranging chat at the Bloomberg Sports Business Summit in NYC Thursday.

Silver addressed his new gig, the ever-expanding business of the NBA, and discussed the possibility of super-early games to accommodate fans in China. Per PBT:

“I think the biggest challenge (to growing the game internationally) is the time zone differences. I mean, for example, in China, roughly 12 hours different from the East Coast. So prime time games are on early in the morning, so you have to figure out whether we need to create new products, condensed games that are shown later, whether it becomes a business of highlights, whether it’s equivalent of tweets and other forms of social media.

“I think that’s sort of — part of the biggest challenge. I mean, ultimately, whether we should consider time-shifting some of our games. Once the audience becomes big enough, maybe it’s not so crazy to ask a team once every two months to play a Saturday morning game….

“Yes, maybe when the audience gets big enough China and you’re reaching 100 million people in China to say so maybe once in a while a team will play at 10:00 on Saturday morning.”