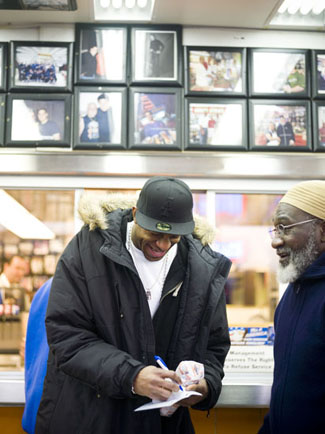 Last night the Phoenix Suns perfect run at road venues in the East came to an end, thanks in large part to Andre Iguodala. With Andre as one of the features in SLAM 107 (on newsstands!), this is the perfect time to put it online, immediately following the behind-the-scenes video of the shoot. Thanks to our photo editor Monique Perreault and the writer himself for the video.

The exuberant squeegee man comes over to the current face of the Philadelphia 76ers franchise, introduces himself, shakes his hand and wishes him and the team well on the rest of the season before returning to his post across the street.

At the corner of 9th and Passyunk in South Philadelphia, celebrity sightings are not an uncommon occurrence—after all, the famous cheesesteak spots, Geno’s and Pat’s, are located at this intersection. But on this frigid January day, the coldest day of the winter so far in the City of Brotherly Love, you’d be hard-pressed to find anyone, let alone an NBA player, playing on the block like it’s July.

Yet Andre Iguodala is, as Sixers’ play-by-play man Marc Zumoff often says during TV broadcasts, playing in traffic—literally. The third-year pro is dribbling a ball—borrowed from five youngsters at a nearby playground—in the middle of the street. Despite the excitement caused by the presence of the hometown team’s brightest star, it isn’t the mob scene one might expect. With their game of 21 interrupted by the photo shoot, the young ballers wait patiently, hoping to maybe get an autograph from Andre for their troubles. (He later hoops with them, takes some pictures, signs their rock and drops a C-note on them for their efforts.) Some neighborhood passers-by take a glimpse and keep it moving, other curious bystanders ask questions or offer up commentary, such as “What’s he doing out here?” or “That’s Andre Iguodala? He seems real regular.”

Understand, too much “regular” is what many Sixers fans perceive to be the problem with Iguodala’s game: From barbershops to press row at Sixers games, there’s an ongoing debate about whether he has what it takes to elevate his game from promising young talent to budding superstar. While no one denies he has ability, Philly fans are well known for holding their stars to a higher standard of excellence.

“Philly is the kind of city that either makes you or breaks you,” acknowledges the 6-6 swingman. “People in the street, they’ll cuss you out in public.”
Playing in a city that wants its stars to be superstars and for a franchise spoiled by the likes of Julius Erving, Charles Barkley and the recently departed Allen Iverson, the remaining AI won’t have to falter much to incur the wrath of Sixers’ fans. In this championship-starved city, where an up-and-down player’s last great performance might earn them two dollars for a ride on the subway to their next home game and an off night can draw the ire of seemingly every fan in the Wachovia Center, Iguodala finds himself in a tough spot. Playing with a teammate as dominant as Iverson made it both easy and difficult for the laid-back swingman to be a complementary player on the Sixers; with the original AI rocking a Nuggets uniform,
Iguodala no longer has the option of playing that part.

That said, it’s ironic that upon entering the League, DreDala was billed as a “Pippen-type” player. A native of Springfield, IL—about halfway between Chicago and St. Louis—Dre patterned much of his game after the former Bulls great while honing his game at Lanphier High. “Growing up, I watched almost every Bulls game,” says Iguodala. “Pippen did everything well. I definitely watched a lot of him.”

Iguodala developed a reputation as an all-around player in high school and AAU competitions, one who was capable of rebounding the ball on the defensive end, starting a fast break with his tremendous speed (he was also a track star) and either finishing the play himself with a skyscraping dunk or using his court vision to find an open teammate. The state’s top player as a senior, Iguodala landed at the University of Arizona, where he was a solid freshman contributor on a squad that advanced to the Elite Eight. His game blossomed as a soph, averaging 12.9 ppg, 8.4 rpg and 4.9 apg, leading Lute Olson’s Wildcats in boards, dimes and steals in a season where he also posted three triple-doubles, joining Jason Kidd as the only player in Pac-10 history to achieve the feat more than once in a season.

Dre subsequently declared for the ’04 NBA Draft, where he was chosen ninth overall by the Sixers. Through his first two seasons in Philly, Iguodala’s play both tantalized and frustrated fans. A starter for all 82 games as a rookie, Iguodala showed potential as a defensive stopper and his athleticism often brought excitement to the
Wachovia Center.

On the other hand, his J was shaky and he didn’t assert himself enough for many locals’ tastes. Still, his first-year stat line of 9.0 ppg, 5.7 rpg, 3.1 apg and 1.7 spg was enough to net him first team All-Rookie honors. With his feet wet in the pro game and fans desperate for the team to improve (the Sixers lost to the Finals-bound Pistons in the first round of the ’05 Playoffs), the prevailing thought around town was that in his second season, Iguodala’s production would increase and he would establish himself as a certified rising star in the League. That didn’t quite happen, as his potential once again exceeded his production. Despite an eye-opening, 30-point, MVP performance at the Rookie-Sophomore Challenge during All-Star Weekend (as well as getting robbed in the Dunk Contest), and besides upping his scoring to 12.3 ppg, his numbers stayed virtually the same across the board and the Sixers failed to make the playoffs.

Early this season, it seemed like more of the same. His points were up slightly, but overall he was still inconsistent, dropping a triple-double against Milwaukee one night—18 points, a career-high 16 boards and 10 dishes in a loss—and an unimpressive 11-point stinker in Jersey a week or so later. If he was Eric Snow, George Lynch or any of the other blue collar Sixers of the ’01 Finals run, that would be straight. But from Iggy, the current team’s supreme talent? In a city like Philly, when you don’t perform up to your potential, people immediately question your heart. “Being in Philly, it’s tough if you’re laid back,” says Iguodala. “People in the city start accusing you of not wanting it.”

Which brings us to the present. You know the situation. The guy with the same initials works in Denver now, and whether you call it a rebuilding year or whatever, this is supposed to be the season where “the other AI” proves his worth. Yeah, he has his teammates, while Andre Miller’s the one taking Iverson’s actual position on the court, but Iggy’s the player everyone expects to pick up most of the slack.

“He’s the guy now and he has all the ingredients, but the one thing he has to do is improve his outside shooting this summer. Then he can be a truly great player,” says longtime Philadelphia Tribune sports writer Donald Hunt. “I think he also has to be a little bit more selfish and take on a bigger responsibility when he gets the ball. He doesn’t have to hog it, but he just needs to be more assertive. His teammates know he’s capable and have confidence in him. He’s at the point where he can start to provide some of that veteran leadership.”

“It was kind of shocking to me,” Iguodala says of the infamous trade. “At first, I was just playing like he [Iverson] was hurt, then 10, 15 games go by…it’s just part of the business of the NBA. I just knew I had to be consistent every single night now. Seeing how he did it really set that example for me. He showed by example on the court, like ‘Follow my lead,’ more or less.

For more on Andre Iguodala, pick up SLAM 107.