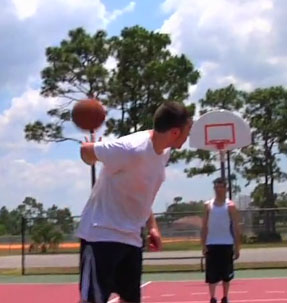 “You know the one from halfcourt, where I flip it through my legs then over my head and then behind the back? I’ve made that shot on my first try.”

Conversation with Bruce Manley, it turns out, is almost as unreal as watching him on tape.

An overnight YouTube sensation thanks to a Shaq Tweet where he said he wanted to find Manley for a $1000 game of H.O.R.S.E., Manley has seen his trick-shot video jump from 300 views last Tuesday night to upwards of 250,000 by Monday morning.

He might look like one in the video, but the 25-year-old bank employee from Sparta, NJ isn’t claiming to be a miracle worker. He admits that some of the shots in his videos have taken some time to make. But as he and numerous friends and family have insisted in the comments section of this site and others, every shot in the video is legit.

“Some of the shots take a little while,” Manley says. “If I shoot it behind the back from the other foul line, I’m still confident that in one or two, maybe three tries, I’ll hit the rim. I try and put it in that general area, and obviously, it’s got to get a tiny bit lucky but it’s definitely more skill than luck. The last shot over the wall, that everyone’s claiming is fake, I made on the 14th try.”

As you can see in the video, the behind the back shot is Manley’s bread and butter. He started working on it when he was 14, after he hurt his shoulder playing baseball.

“I used to pitch and I hurt my shoulder,” he explains. “It wasn’t anything that serious, I didn’t get surgery or anything like that but whenever I went to throw overhand my shoulder would just pop a little bit and it became kind of painful.”

As crazy as Manley’s skills and videos are, it wasn’t until Shaq got involved that things took off. Thomas Litteer, who edited the video, grew up with Manley and is now his manager. He got Shaq to look at the video through some unconventional methods.

“(Litteer) was pretty sly and he posted it (on Twitter for Shaq) and the subject was, ‘Shaq check this out, it’s Chris Bosh and Greg Oden’s love child,’” Manley says. “He did something creative, so when Shaq saw it he clicked on it and then it just blew up.”

And blow up it has. On Sunday night, Litteer was on the radio in Baltimore, talking about the video. The video itself is making its rounds on blogs and shortly after the views started taking off, Bruce’s phone started ringing, with TV people looking to talk with him. Litteer is working on sponsorships, but is keeping quiet on the specifics. He’s hoping it’ll be tied in with Manley’s game of H.O.R.S.E. against Shaq, which could take place in early July. The involvement of TV networks, Litteer says, could push it back to later in the month.

For what it’s worth, Manley is confident that he can take Shaq in H.O.R.S.E., as long as there are two rules.

“One, no dunks and to make it fair, I won’t shoot foul shots,” he says. “I hope Shaq isn’t offended by that comment.”

Litteer says the big fella, just like the rest of us, wants to see Bruce for himself.

“(Shaq) mentioned on the phone that he didn’t believe it, he wanted to see it in person,” he says. “I think that’s a big part, not so much that he thinks he can beat Bruce at H.O.R.S.E. or anything, he wants to see if it’s real.”

Litteer has posted a new video with Manley, this one showing his passing abilities. No word on if a Shaq and LeBron two-on-two challenge will be issued yet.