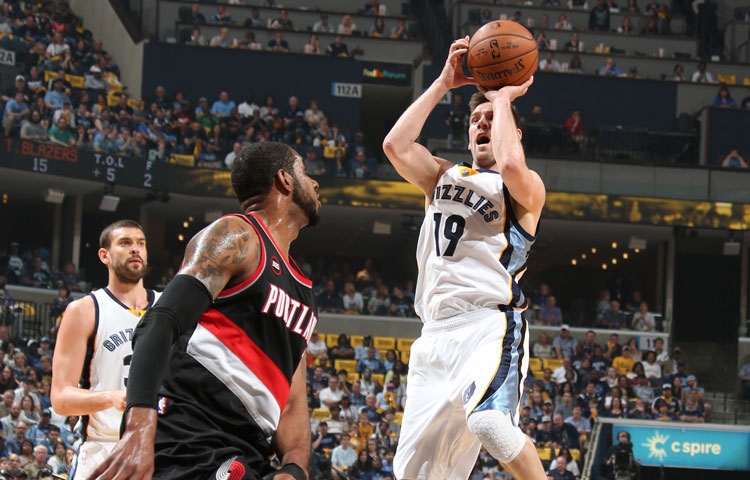 The Memphis Grizzlies beat up the visiting Portland Trail Blazers in a 100-86 Game 1 win Sunday, holding the Blazers to just 33% shooting from the field.

Backup point guard Beno Udrih led the way offensively for the Grizz, pouring in a team-high 20 points to go along with seven rebounds and seven assists.

Game 2 tips off Wednesday in Memphis.

The Griz began their Western Conference first-round playoff series by not just crowding (LaMarcus) Aldridge and Blazers point guard Damian Lillard. Memphis accomplished its mission of setting the tone for an aggressive, defensive-minded series. […] “They let us play, and that’s what we want to do,” Griz forward Zach Randolph said. “We want the game physical as long as it’s clean. We focused on trying to keep them out of the paint and make them take jump shots. We played great defense. But we can’t get satisfied. We’ve got to keep pushing and pushing.”

Randolph received a busted lip while scoring the Grizzlies’ first basket of the game. After that, the Griz putting a hurting on Aldridge and Lillard whenever they tried to score. They combined to shoot 18 of 55 from the field, and the Blazers shot just 33.7 percent for the game after missing 22 of their first 29 shots. […] With backup point guard Beno Udrih providing a jolt on offense, the Griz built a 21-point lead before halftime and were never threatened in the second half.

Udrih buried his first six shots and led the Griz with 20 points off the bench. However, Randolph (16 points, 11 rebounds) and Gasol (15 points, 11 rebounds) were assertive on both ends of the court early and left little doubt that the Griz would control the paint. […] “They took the initiative and said they wanted to be the bruise brothers,” Griz guard Tony Allen said. “They were the bruise brothers. … And they did it on the defensive end, too. When we hang our hats on the defensive end good things happen no matter what we do offensively. We’re going to have to keep that up in this series.”