The 30 Best High School Mixtapes of All Time 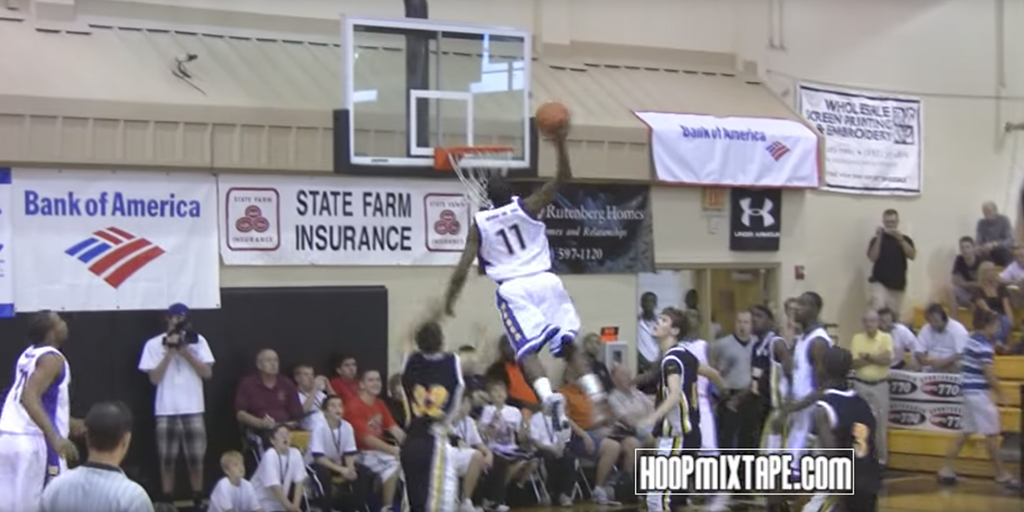 Jennings left his own and John Wall’s off his personal list, and said Zion Williamson’s highlights will go down in the record books.

Everyone chimed in, from bloggers to other NBA players, so we at decided to give our two cents.

We went through the mixtape archives and found the 30 best out there, and then ranked them. For those wondering why there’s no LeBron James or Sebastian Telfair: they were around just before mixtapes from brands like Ballislife and Hoopmixtape blew up. This is strictly a digital list.

As for Zion and LaMelo…Well, their story is still being written, but there is no doubt in our minds that we’ll have to go back and rearrange this list by the end of next season.

Agree with our choices? Doubtful. So scroll down, check out the mixtapes and let us know what we got wrong.

The undisputed mixtape GOAT. Wall was a man among boys in high school and his Hoopmixtape made him a legend before he even started at Kentucky.

“The Crime Stopper” got his name by filling the stands in Baltimore—and then in Paterson, New Jersey—with his unbelievable handles and crafty finishes. Standing 5-6, Aquille Carr was a YouTube sensation who would light up the floor anytime he stepped on it. There was nothing he couldn’t do out there. Crime in his native East Baltimore literally fell during his games, for real.

At 14 years old, Seventh Woods absolutely took the internet by storm with dunk after dunk. Woods is currently at North Carolina, entering his sophomore season, so he has a ton of his career ahead of him. But for now, he is best known for this insane highlight tape.

Hoophead Brandon Jennings is also famous for having one of the best mixtapes of all time. Everything is on display in this four-minute video, ranging from deep threes to ankle-shattering crossovers. Jennings always put on a show when he was out there at such a young age and helped pave the way for high school mixtapes to become as popular as they are today.

Before Andrew Wiggins was the centerpiece of the upstart Minnesota Timberwolves, he was dunking everything at West Virginia’s Huntington Prep. And we mean everything. Wiggins showed off his nasty vertical as a senior in high school and was too good for the competition.

Nasty handles? Check. Sweet jump shot? Check. Trashtalking in his mixtape? Check. Austin Rivers checked off all the boxes in his highlight reel.

The images may be grainy, but it is as clear as day that Derrick Rose was worth all of the hype in high school. Rose was simply too quick for defenders on the perimeter and too explosive to be stopped once he took off.

Marcus LoVett was a sophomore at the time of this clip, but he was head and shoulders above the rest. LoVett’s attitude matched his game—loud and confident.

You can’t help but get incredibly excited for Simmons’ rookie debut in a few months after watching him take over in his mixtape.

By the time OJ Mayo stepped foot on USC’s campus, he was already a folk legend. The wing was an absolute terror to cover in high school and he parlayed his insane hype into a great season at USC and then a top-5 pick in the NBA Draft.

You might not remember Gabe York, who played four solid seasons at Arizona, but his high school tape is something to behold. With dunks, jumpers and crossovers, he was dominant as a Southern California prep prospect.

Josh Selby was a consensus top-5 recruit in the Class of 2010 who dazzled crowds with his dominant all-around game. That brought him to Kansas, where Selby struggled through his freshman season before leaving for the pros. He spent parts of two seasons with the Grizzlies and shuttled around the G-League. Now, he’s overseas.

Julius Randle was an absolute specimen as a high schooler. Before he went off to Kentucky, Randle ran through and dunked over everything in his path.

“What?” That’s all you can say after watching Derrick Jones in his mixtape. Jones leaps higher than almost anyone and is now jamming in the NBA Dunk Contest as a member of the Suns.

Thon Maker burst onto the scene a few years back with his rare mix of size and pure ability. Maker destroyed opponents and was nearly unguardable at this level.

DeRozan, always an athletic specimen, really showed how talented he was at the high school level. Not afraid to take off and finish over anyone in his way, DeRozan was a star in the making.

At 16 years old, Harry Giles drew comparisons to Kevin Garnett. With this highlight package, could you say disagree? Giles was a do-it-all big man who seemed to be playing a different game than the other guys on the court.

Born Ready earned his nickname because he was just that. The Coney Island, Brooklyn, native was so dominant as a teenager that many had him pegged as the next big thing in basketball.

Before being the No. 9 pick in the 2017 NBA Draft, Dennis Smith Jr put up one of the most impressive mixtapes to date. DSJ showed insane hops and a killer mentality at the high school level.

Another small guard, Trae Jefferson was Milwaukee’s version of Aquille Carr a few years back. There’s a lot of Nate Robinson in his game, from the look-away passes to stepback jumpers. Jefferson averaged 14.8 points during his first season at Texas Southern this past year, and there’s certainly more to come from the 5-7 stud.

Thanks to injuries, Jrue Holiday doesn’t quite have the explosiveness he did in high school, where he would use any means to roast anyone stupid enough to try and defend him.

This is probably one of the meaner mixtapes on the list. Even as a 16-year-old, Aaron Gordon had a tendency to just bully the rim with huge dunks. It’s just not fair that he adds some dirty stepback threes to a vicious offensive repertoire that led him to Arizona and then the Magic.

Some guys are good at dunking, and some guys are natural-born dunkers. Josh Jackson would be considered the latter. His rise off the ground is seemingly effortless, which helps for both his jams and his big blocks. For a guy of his size, the handle and passing isn’t bad either.

There isn’t much on a basketball court that De’Aaron Fox can’t do, which makes his mixtape all the more impressive. The creative dribble moves are awe-inspiring enough on their own, but when you view them in succession with tomahawks, windmills and pull-up threes, it makes you wonder how Fox’s team ever lost in high school.

Not many point guards can do what Emmanuel Mudiay was ahead of his years in high school and one can only imagine how dominant he would have been in college.

It’s weird to have James Harden so low on this list, which is certainly not a knock on him as a player. The Beard was great in high school but what made him great then—and continues to today—is not necessarily what lights up a mixtape. Still, some of his dishes in this one are real nice, as are the long threes.

While his face still looked pretty young, Jabari Parker was a grown man during his time at Chicago’s Simeon High School. Undersized defenders had no shot at stopping him in the lane, and had an equally hard time getting out to the perimeter to contest his shots.

Like Josh Selby, Jahii Carson was a high school standout who probably left college a bit too early. Carson played at Arizona State for two years before declaring for the draft, in which he wasn’t picked despite recording some crazy jumping measurements at the Combine. He then played in Serbia and Croatia before heading up to play in Canada’s top league, the NBL.

At 5-7, Kiwi Gardner dazzled crowds with his ball-handling and bounce. The electric point guard committed to Providence College, but never earned eligibility. After playing for the Warriors G-League team, he headed overseas this past year.