Best Moments From The 2011 NBA Lockout 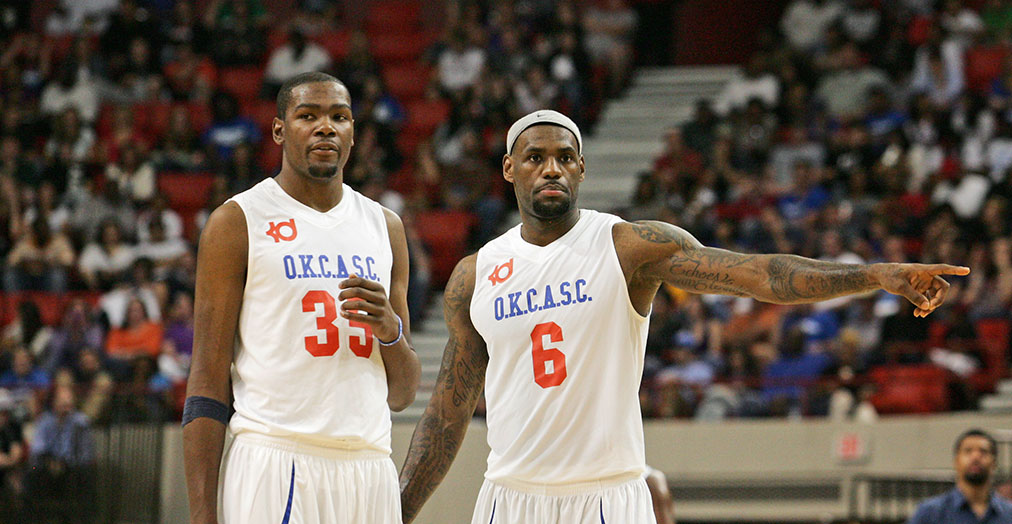 The 2011 NBA lockout may have stopped basketball fans across the globe from watching The Association on a nightly basis for half the season, but it didn’t stop anyone from logging onto YouTube every night to watch the latest pickup game highlights from the best of the best across the country.

LeBron James, Kevin Durant, Chris Paul and other pros took to whatever game was being played—be it in parks or college arenas or even high school gyms—to ball out. Let’s take a look at the best highlights, mixtapes and matchups from the 2011 Lockout:

KD’s performance at New York’s legendary Rucker Park might be the most enduring moment of the entire lockout. Stars have come to Rucker for years—from Dr. J to Kobe to Allen Iverson—and what Durant did that night was legendary. The points flowed as fast as the trash talk did and nothing could come between KD and his 66 points.

LeBron and KD have been the two best in the League for almost a decade now, and with the two superstars on a crash course for the NBA Finals in the coming year, it made sense to go at each other as much as they could in the offseason. It seemed that every day there was a new highlight package centered around what LeBron or Durant were doing in a different city.

Both at the top of their game and itching to hoop, they hit the hardwood as much as they could, often directly against each other and they even worked out together. North Carolina, Memphis, Oklahoma City, Baltimore. You name a place, they were going to be playing. They turned the 2011 lockout circuit into a national production.

Hoop junkie Brandon Jennings is always looking for a game. So, when the NBA shutdown for part of 2011, he took to local courts across the country. Jennings didn’t join the high profile games that LeBron was in, but he found great competition, and cleaned it up with ease. His tight handle and unlimited range was on display throughout the summer and fall as he reminded us that he’s been one of the most exciting players in the League.

Kobe may have been on the older side when this lockout came around—the second one of his career—but that didn’t stop Mamba from showing out once in front of a big crowd. Bryant made an appearance at the Drew League, locking up with James Harden in a mid-day shootout. In true Mamba fashion, he knocked down a game-winning buzzer-beater in Harden’s face.

Like we said before, Kevin Durant was everywhere during the lockout. Durant may have been the star of the NBA during this pickup game circuit, as he seemed to be involved in every big game against all the other big names. This time, he was playing with John Wall, and the two brought it in a Drew League (LA) vs. Goodman League (DMV) showdown. James Harden and DeMar DeRozan also played, with Harden dropping 48.

Indianapolis natives Eric Gordon and Jeff Teague brought the lockout circuit to their home city and John Wall, DeMarcus Cousins, Paul George and a bunch of other NBAers joined what was one of the summer’s more competitive games. Bonus points for the multiple Josh McRoberts jams and a super young Gordon Hayward.

Melo put the body on those willing to stand between him and the hoop, offering flashbacks to when he was dunking every other night. In the few games that the Baltimore-bred bucket-getter suited up during the lockout, he continually raised up over defenders with two-dribble hezzys that were impossible to stop.

Tyreke Evans Shows Off His Handle

Tyreke Evans has low key had one of the best handles in the game for a minute now and his game was on full display during the 2011 summer. Showing up to local runs, or playing against the top high school prospects during the Elite 24 scrimmage, Reke’s ball was on a string all summer.

CP3 was in a few of the aforementioned clips but the “Point God” is deserving of his own highlight reel. Arguably the best lead guard of his generation, Paul’s handles are matched by few, making him especially devastating to anyone that tried to D him up during the lockout. He toured the country, burning players off the dribble and making some ridiculous passes. No one can deny Paul’s determination and, even in a pick-up game, he brought everything to the floor.

Well before he made his first All-Star team or even played in the playoffs, Steph Curry was drilling ridiculous threes in front of unsuspecting defenders during the lockout. He was able to show out against former Warriors, like Corey Maggette and Gilbert Arenas, in what became a who’s who of the organization’s best players—up until 2011. Steph’s stroke was just as cash back then as it is now.

The biggest takeaway from the lockout — besides the importance of labor peace — is just how good every single NBA player is. Obviously, guys like KD and LeBron are going to run through pickup games but even lesser-established guys and older veterans — like Jeremy Evans and Baron Davis, for example — make incredible plays with such ease. We’re used to seeing them in 20,000-seat arenas so when guys do it on college or high school courts in front of hundreds of fans, it feels more real. And, it’s a lot cooler.

The lockout was so boring to some players that it even pushed them to try on a new sport for size. So, when KD was in Oklahoma City one day with nothing to do, he tried to find a pickup flag football game to get into. Of course, he was the biggest guy on the field when he played against a bunch of Oklahoma State students and made the rest of the sports world wonder about how good he could be if he chose football over basketball. Hint: he probably would have been pretty good.