Boban Marjanovic Scores a Career-High 18 Points vs. the Sixers (VIDEO) 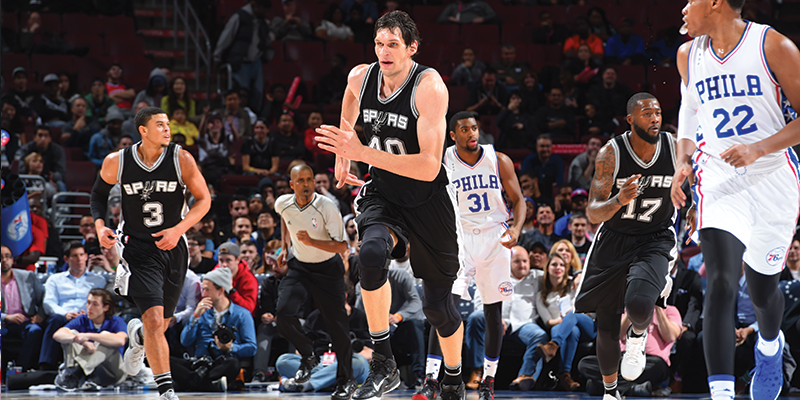 The San Antonio Spurs enjoyed the largest margin of victory in franchise history Monday night, taking down the woeful Philadelphia Sixers 119-68, and their gigantic rookie center Boban Marjanovic shined with a career-best 18 points.

Boban goes on 5-0 run and the bench is loving it! pic.twitter.com/zOKuzWtiXZ

Sixers fans fell in love with the big fella. who had just returned from a stint in the D-League.

In his second game with the Austin Spurs, he broke one of the rims at the Cedar Park Events Center with a dunk, causing a delay. Back with the big club on Monday, Marjanovic scored a season-best 18 points in a 119-68 obliteration of Philadelphia, and could offer the sad-sack 76ers this bit of consolation about the constitution of the Wells Fargo Center. […] “They are better rims here,” Marjanovic said.

The 51-point margin surpassed a 49-point win over Vancouver in November 1995. It left coach Gregg Popovich to sympathize with his Philadelphia counterpart and former Spurs assistant Brett Brown, whose team plummeted to 1-21. […] “What’s tough is I know he’s a hell of coach, but it’s not a fair battle talent-for-talent,” Popovich said. “It’s ridiculous.”

With LaMarcus Aldridge scoring 20 of his season-best 26 points in the first half, the Spurs raced out to 65-29 lead at intermission.