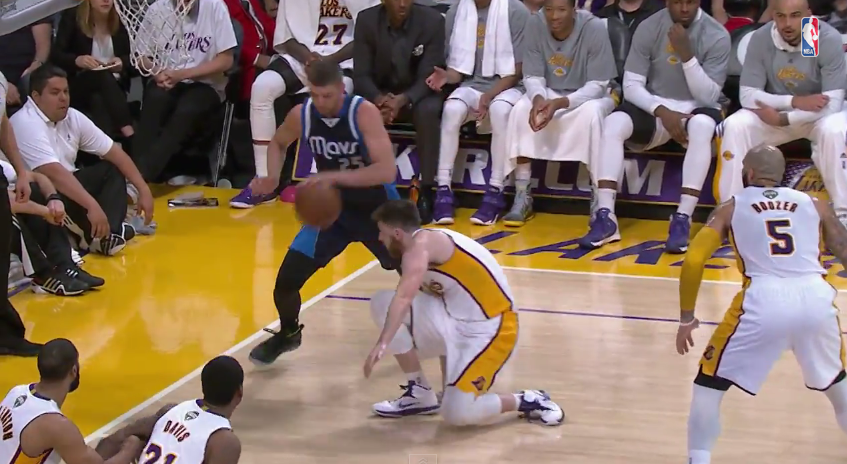 A fairly simple crossover move from Chandler Parsons got Ryan Kelly to lose his footing Sunday night, clearing the way for Parsons to scoop in a nice lefty layup.

The Dallas Mavericks rallied to beat the Lakers 100-93 in Los Angeles.

It all came together Sunday night for the All-Star shooting guard against the Los Angeles Lakers. (Monta) Ellis shot 12 for 22 and scored 18 of his 31 points in the third quarter to help the Mavs pull out a 100-93 victory. […] “It’s a long season, and sometimes you go through stretches when you just have to stay positive and do the necessary work you need to do to get yourself back on track,” said Ellis, who shot 5 of 7 from 3-point range. “The shots were just falling tonight, and my big men did a great job of screening for me so that I could get to my spots and attack the rim.

“Sometimes I can be my own enemy when I go to the basket and don’t get the foul. Then I get frustrated and lose my game a little bit,” he added. “Tonight the biggest thing for me was just to get back to being aggressive — and if they call it, they call it. If they don’t, I continue to attack.”

Dirk Nowitzki had 12 points for the Mavericks, who had lost four of five. They played without point guard Devin Harris for the second straight game because of an injured right hand, but Chandler Parsons returned to the lineup and finished with 11 points and six rebounds in 35 minutes after missing seven games with a sprained left ankle. […] “Getting Parsons back was a key for us,” Ellis said. “His shot wasn’t going down, but he played great defense in the second half and made a couple of plays down the stretch to get us over the hump. We needed a win, and the team did a great job of coming together.”