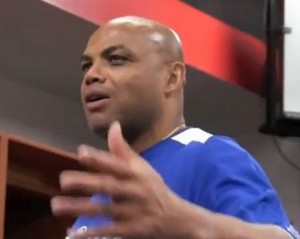 Dirk Nowitzki hosted a celebrity baseball game in Frisco, TX, over the weekend, and before the game, Charles Barkley told a story about the first time he saw Dirk play. Charles, Michael Jordan, Scottie Pippen and other NBA stars were playing high schoolers during the Nike “Hoop Heroes Tour” in Germany in 1997. Barkley & Co. end up playing against a teenage Dirk in a game where Nowitzki torched (according to Barkley) Pippen for 52 points. Barkley said he was so impressed with Nowitzki that he trying to recruit him to attend Auburn. Of course, Barkley’s efforts were unsuccessful, as Dirk went straight to the L in ’98, bypassing offers from more than 30 colleges.