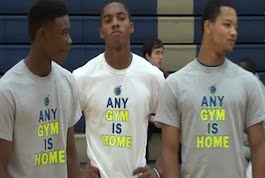 For Chet Mason, it is all about giving back. The former MAC defensive player of the year and current pro overseas has been holding it down in the Cleveland community since he became a pro in ’05. From free basketball clinics to charity basketball games to feed the homeless, the 1999 Ohio Mr. Basketball has done it all with a smile on his face. Joining up with longtime friends and fellow overseas pros Julius “Juby” Johnson and Dwayne Cohill, they established an idea for the Best of The Best combine.

Inviting 25 of the best players from the area, the event blended legit run with some legit instruction. The players did all of the same drills as potential NBA rooks do at the NBA Combine, then played games at the end. All of this was done free of charge and the event was interesting enough that even NBA players wanted to join in and help out with the cause.

“Never be satisfied. I’m proud of y’all,” Cavaliers point guard AJ Price told the group. “Y’all come out on a rainy Saturday and are working hard. Being in the gym and working hard is how you catch people.”

Throughout the drills and games, there was no shortage of legit talent in C-Town. Here are a few of the players who caught our eye at the Best of The Best Combine:

Ohio’s best sophomore lived up to the hype this past weekend at Garfield. One of the most explosive guards in the class of 2017, he made a number of ridiculous finishes at the rim that had even Cavs point guard AJ Price shaking his head in disbelief. He knows how to convert against bigger defenders, can convert with either hand, and will even go up and try to dunk on you. His J can be a little erratic at times, but it’s good enough to keep the D honest. Making a splash in Cleveland’s city league as a freshman by helping take the squad to final four in Ohio’s biggest division, goals are even higher for the East 55th squad this year.

While Markell Johnson was busting out highlights on the perimeter, Montell McRae was holding it down in the paint. He spiked a number of shots volleyball style, floated through the rim to catch oops, and stepped out to hit three pointers. Montell still needs to hit the weights to improve his 190 pound frame, but has the raw tools to develop into a high major player if he opts to become a member of the class of 2016.

Unknown before showing out at Mike Duncan’s Adidas Midwest Elite Camp, Lucien lived up to the hype at the Best of The Best. He shot the ball well from deep, was a monster in transition, and was fearless attacking the rim. Lucien looked to dunk everything around the cup and tried to rise up over the top of a number of defenders who were substantially taller than him. In the last week and a half, Lucien has went from having no D-1’s on him to having the likes of Stanford, Xavier, and countless mid-majors inquiring about his services.

Surprising most in the combine portion, Lillard showed off more strength and athleticism than his wiry frame depicts. He did 19 reps on the bench and finished second in the full court sprint out of a group of 25. The lights out shooter displayed improved strength, improved D, and was simply more aggressive on both ends of the hardwood. Claiming offers from Kent State, Cleveland State, Arkansas State, Manhattan, St. Peters, and Oakland, Lillard doesn’t appear to be planning on making a collegiate decision anytime soon.

It’s hard to believe that Willie Jackson is just a junior. Well known before ever playing a high school game, the powerfully built wing has emerged as a high major prospect. Willie was a nightmare to stop attacking the rim, made a huge impact on the offensive glass, and defended multiple positions all over the court. Willie still needs to continue to work on his perimeter skill level, but that didn’t stop Iowa State, Wisconsin, and SMU from offering him a scholarship early on.

One of the best players in the city, Carmon and Markell Johnson formed arguably the state’s best backcourt last year and will look to do so again. Able to play both guard slots, he is a big time shot creator who has more bounce than you see at first glimpse. He still needs to get more experience running the show full-time and while Cleveland State is his only D-1 offer at the moment, expect plenty more to jump in by the time it is all said and done.

An import from Senegal, Mahamadou has only been in Cleveland for little over two weeks and has already developed quite the buzz. Weighing 240 pounds and rocking a 7’3 wingspan, he has the size of most NBA centers and runs the floor at an elite level. Don’t get it twisted, Camara is a long ways away in the skill department, but is undoubtedly a guy that college coaches will be monitoring.