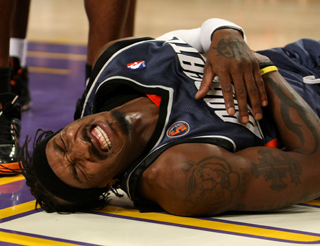 Let’s go straight to the incident:

A few points need to be made about this play. First, it was a tough collision and a strong move to the cup. It’s definitely sad to hear Wallace had to be brought to the hospital. This from Rick Bonnell of the Charlotte Observer:

According to the team, Wallace lost 30-40 percent of the capacity in his left lung. He also suffered a non-displaced fracture of the fifth rib on his left side.

Doctors at Centinela Hospital inserted a tube in Wallace’s lung to help restore functional capacity. Wallace will spend at least Wednesday night in the hospital. Doctors do not anticipate releasing him before late Thursday.

Second, Crash is one of the most injury prone players in the League. Don’t sleep on the fact that he’s played over 55 games in just three seasons. Now consider that he’s he’s missed only four games all year…an injury, of any magnitude, was nigh.

A cracked rib isn’t something to laugh at, but it actually is a relief considering Wallace’s four concussions during his first four seasons with the Bobcats. Another concussion likely will be fatal.

Another point: It could be just me, but the entire Bobcats team needs to be put on blast. I feel almost guilty for doing this right after they went into L.A. and beat the Lakers, but it needs to be done. No legit team lets a man get KO’d with no response. Weak!

Lastly, a suspension for Bynum is not necessary. By no means did it seem malicious or as powerful as this. If it wasn’t called a Flagrant II or resulted in an ejection, a suspension shouldn’t even be considered.