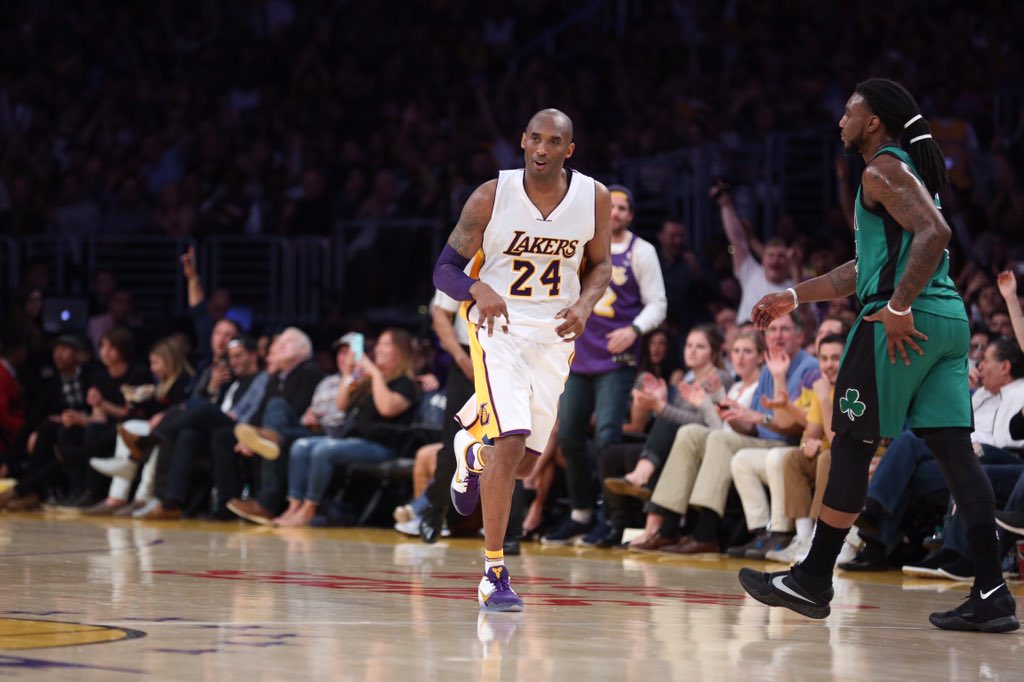 With nothing to play for in this his 20th and final NBA season, Kobe Bryant has often been seen uncharacteristically joking around and laughing on the court.

But his demeanor seems to change when the Boston Celtics are the opponent—a “dead serious” Bryant dropped 34 points on the hated C’s, but it wasn’t enough for the Los Angeles Lakers who fell 107-100 Sunday night (despite overcoming a 17-point deficit) to the visitors from Beantown.

At halftime, Byron asked players if they've been in a fistfight. Byron argued they can't accept opponent throwing 1st punch & expect to win

Isaiah Thomas led the way for Playoff-bound Boston with 26 points and six assists.

Legendary trainer Gary Vitti was given a proper sendoff as he puts the finishing touches on a brilliant 32-year career.

The Lakers (16-60) still lost another game to continue a depressing season destined to end with ping pong balls bouncing instead of champagne bottles popping. Yet, for one night the atmosphere suggested otherwise. […] “It’s weird, last time facing that green,” Bryant said. “But it’s been a joy to be able to be a part of a rivalry that I watched for so long.”

Bryant credited his outburst to “rest, rest, rest” before also adding endless icing and stretching. Lakers coach Byron Scott also saw something else fuel Bryant’s motor. […] “This is probably the first game in a while that KB was dead serious the whole game,” Scott said. “He wasn’t joking around tonight. He wasn’t smiling with other opponents. He wasn’t talking a lot. He understands this series. Obviously he wanted to win this one badly. I don’t know if our other guys understand this. Hopefully in time they will.”