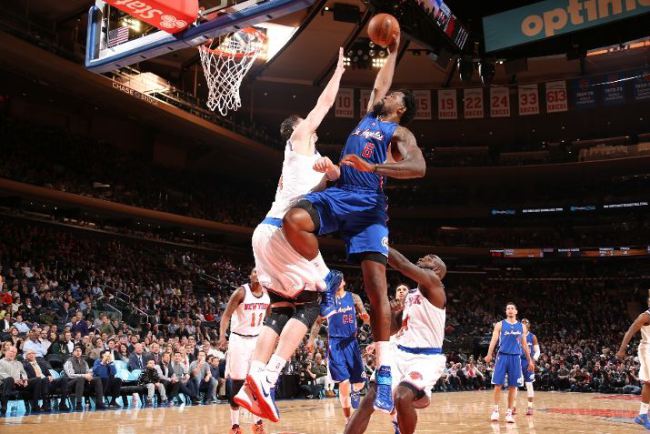 We are gathered here to mourn the basketball death of one Jason Smith, a member of the New York Knicks.

DeAndre Jordan spent a lot of time Wednesday night mercilessly punishing the rims at Madison Square Garden, as the LA Clippers rolled to an easy 110-80 victory.

It was the most lopsided victory at MSG in franchise history, something former Knicks head coach Mike Woodson surely enjoyed—Woody, now an assistant with the Clips, spoke on behalf of an ailing Doc Rivers postgame.

A Clippers official announced that Coach Doc Rivers had developed a stomach illness, leaving assistant Mike Woodson to address the media Wednesday night after the team’s 111-80 victory over the New York Knicks. […] So, when did Rivers tell Woodson that he was going to be sick? “No comment,” Woodson said with a sly smile.

The beatdown was so severe that the Knicks didn’t mind showing multiple replays of Clippers center DeAndre Jordan’s vicious one-handed dunk over Jason Smith late in the second quarter. […] Jordan’s dunks were among the few things that elicited an audible reaction from the crowd. He finished with 14 points and 10 rebounds as every Clippers starter reached double figures in scoring before leaving the game late in the third quarter.

The team’s fifth consecutive victory gave it a 1 1/2-game lead on Portland for home-court advantage in the first round of the playoffs with 10 games left in the regular season.