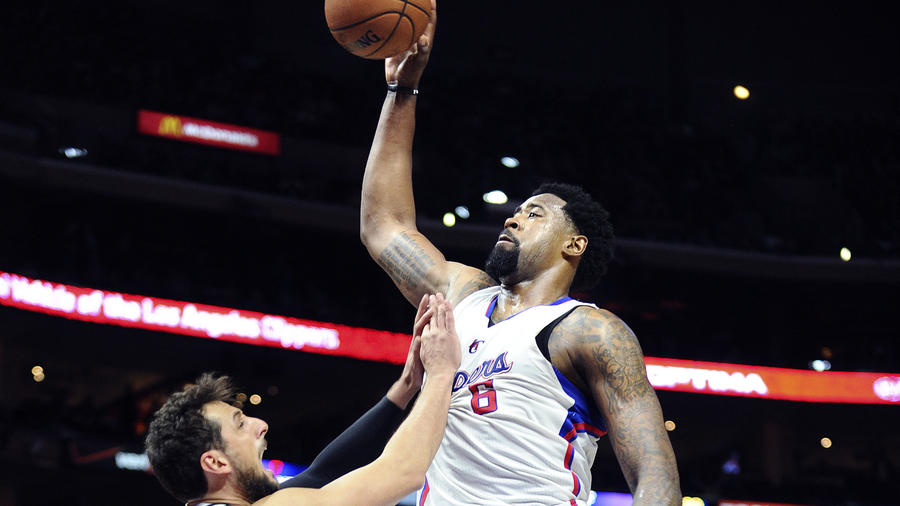 Poor Marco Belinelli found himself as the lone man back defending an LA Clippers fastbreak Thursday night, and things did not end well for him.

After getting sorta dunked on by Tim Duncan earlier in the game, DeAndre Jordan exacted revenge on Duncan’s teammate with a high-flying finish.

The San Antonio Spurs could do little else but intentionally foul Jordan, as he dominated them with 26 points and 18 rebounds in the Clips’ 119-115 win.

It happened again and again and again Thursday night at Staples Center, repeating itself so often that at one point Spurs center Aron Baynes appeared to apologize to the Jordan for the tactic. […] Jordan made fewer than half of his free throws while being intentionally fouled, but the Clippers felt whole after enduring the strategy on the way to a 119-115 victory in their first game after the All-Star break.

Jordan made six of 14 free throws in the fourth quarter while being intentionally being fouled and nine of 24 in that scenario for the game. It didn’t stop Jordan from finishing with 26 points and 18 rebounds, falling just short of a third consecutive 20-20 game. […] “That fouling thing is like a sign of respect,” Paul said. “That’s one of the only ways you can stop him, or try to. He didn’t let it faze him. He kept playing, kept rebounding.”

Clippers Coach Doc Rivers took Jordan out of the game with 4:26 left and L.A. leading, 105-101, replacing Jordan with Matt Barnes. Jordan reentered with less than two minutes left, when the Spurs could no longer intentionally foul him without giving the Clippers two free throws and the ball. […] “When I get to my phone I’ll have 30 texts, ‘Why do you allow this in your game?’” said Rivers, who is a member of the NBA’s competition committee that considers rules changes but said the intentional fouling strategy did not bother him.