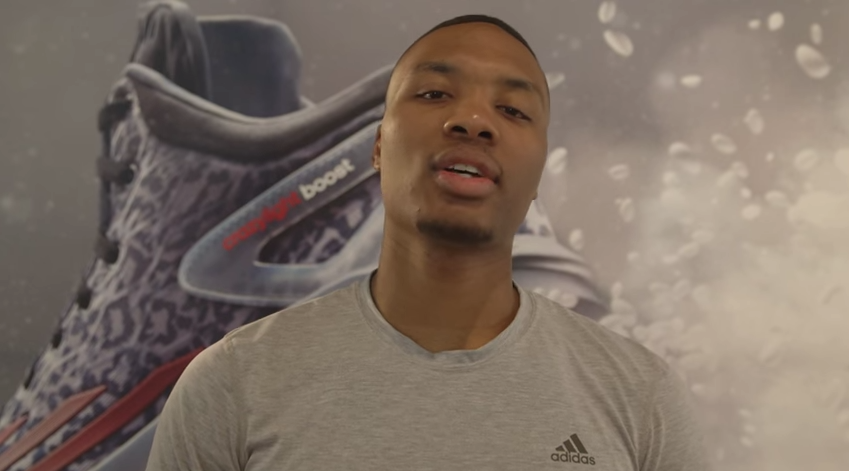 Afterward, Rose told us about the evolution of his kicks. “We’re trying not to be satisfied,” he said. “My job is to keep coming up with ideas, keep giving [adidas] ideas to run with and work my butt off on the court. I just told them I wanted a simple shoe—they came up with everything else.”

The details of the D Rose 5 Boost were specifically created with Derrick in mind, though. “They put my mom’s name on it,” Rose said. “On the bottom there’s a peace sign, because in almost every picture I throw up the peace sign. And all my friends have the same tattoo that says ‘Everybody eats,’ so that’s on the bottom, just because of my friends. That’s something that me and all my friends have—it means everybody’s equal and nobody’s bigger than another person. We always have each other’s back.”

Rose will be wearing the D Rose 5 Boosts during the coming NBA season, while Lillard—and a host of other adidas-sponsored NBA athletes—will be rocking the Crazylight Boosts.

Lillard was familiar with the Boost technology—found at the bottom of the Crazylight Boosts and the D Rose 5 Boosts—before it ever found its way into the basketball realm. “I tried the Boost running shoe first,” he said. “They sent ’em to me, and I put ’em on and realized it was a different material. For them to think to put it in a basketball shoe is brilliant.”

The Crazylight Boost will hit stores on September 1 for $140, while the D Rose 5 Boost will be released on October 23 for $140. Both can be purchased at adidas.com.