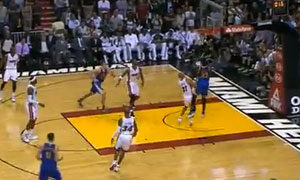 Rookie Draymond Green earned LeBron James’ respect last night — the two were talking trash in the fourth quarter before Green scored the winning hoop. James paid him a compliment after the game. Per the Contra Costa Times: “With 9:24 left in the fourth quarter, and James starting to take over, he drove to the basket and dropped in a driving hook. He got the foul and the basket, then followed with some words for Green. The Warriors rookie then walked right into James’ face and barked back. ‘I’m not going to back down from anyone,’ Green said. ‘Yes he is one of the greatest players in the world. But that’s not a license for me to back down. I’m trying to make a name for myself in this league just like he did once upon a time.’ As soon as the game ended, James went out of his way to shake Green’s hand. ‘He played hard,’ James said. ‘It was great competition out there between me and him. I have always respected him, especially in college. You could tell he really knows how to play the game. It was good to see him out there.'”