The ultra-versatile swingman can do it all. 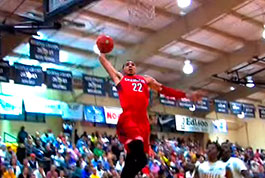 SLAM’s 2015-2016 HS Diarist has expectedly been killing it on the hardwood this winter in his final season before heading off to Durham, NC, to hoop for Duke in the fall. The future Blue Devil is reportedly averaging over 28 points per game for Chaminade (St. Louis, MO) this season, who is ranked as the top team in the state of Missouri and among the top 20 programs in the nation, according to USA Today’s latest rankings. Tatum has drawn comparisons to the likes of Kevin Durant and Paul George. Our friends at Ballislife put out the most recent highlight mixtape of Tatum just a couple of days ago. As you’ll see, the long and athletic wing can do damage in a variety of ways. Check it out above!