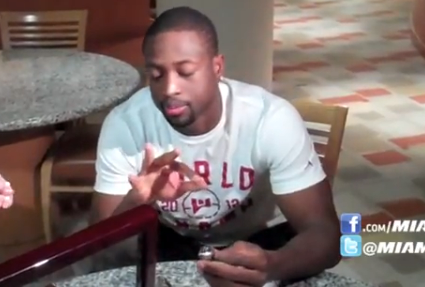 Here’s a strangely hypnotic (and rare) look at an NBA champ getting fitted for his ring. Dwyane Wade and his Miami Heat teammates have been going through the fittings with the season just around the corner. From the Sun-Sentinel: “With fittings required well in advance of the Heat’s opening-night championship celebration on Oct. 30 against the visiting Boston Celtics, Dwyane Wade, Mario Chalmers and James Jones were the latest to be sized up Tuesday at AmericanAirlines Arena. ‘I’m so excited,’ said Wade, whose ring size turned out to be 13 1/2. For Wade, it was a bit of a dilemma, because he already had his 2006 championship ring fitted for his right ring finger. ‘These are good problems to have,’ he said. He also said his left ring finger was off limits, which could turn into welcomed news for girlfriend Gabrielle Union. ‘I can’t put it on this finger,’ he said, ‘because one day hopefully I’ll be happily married.’ Ultimately, his right index finger won out. Previously sized up were Shane Battier, Norris Cole, Dexter Pittman, Terrel Harris and Juwan Howard, who waited 18 seasons for his first championship. Also in for recent fittings were Heat President Pat Riley, coach Erik Spoelstra and executive Alonzo Mourning. With the exception of LeBron James and Chris Bosh, just about all 18 players under contract for training camp have been working out regularly at AmericanAirlines Arena.”