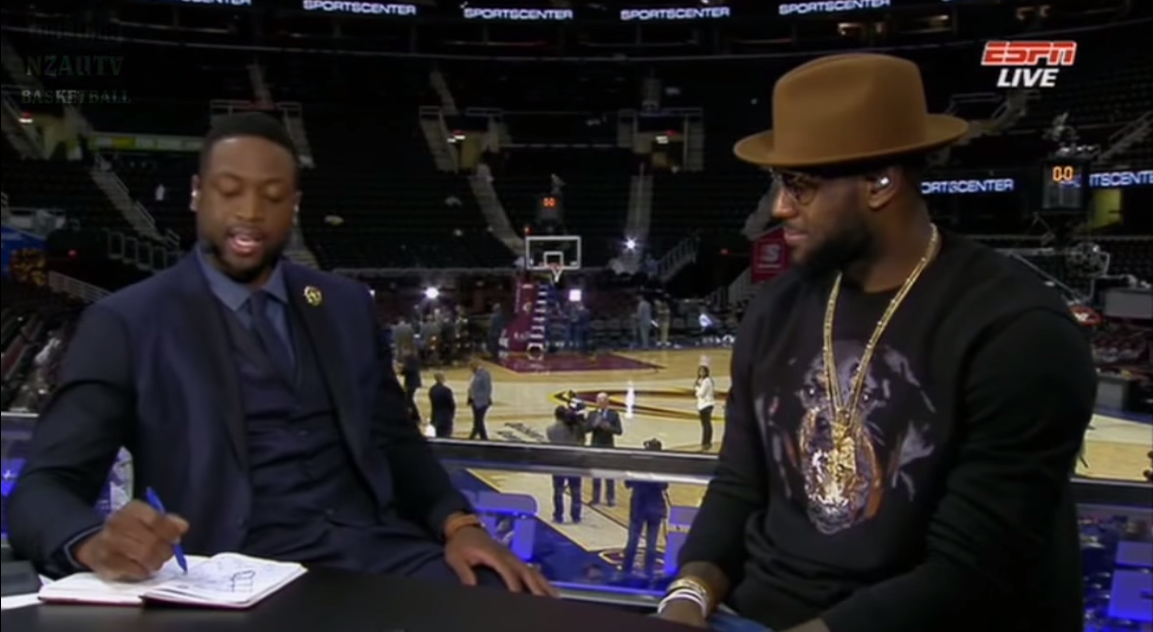 Miami Heat superstar guard Dwyane Wade is currently moonlighting as a TV talking head, and he had a great interview with former teammate LeBron James following a masterful Game 3 performance Tuesday night in the NBA Finals.

James’ absurd statline of 40 points, 12 boards and eight dimes pushed the Cleveland Cavaliers to a 2-1 series lead over the favored Golden State Warriors.

Tristan Thompson on LeBron: "We're just jumping on his shoulders and riding him through the game." pic.twitter.com/9XI5jwv2eP

"I don't know if I can keep putting up these type numbers but I know I'll continue to lead these guys every night." pic.twitter.com/4ImdnCdXI1

Wade got LeBron to admit that he was mad about losing out on the MVP award to Stephen Curry, but James wouldn’t reveal his so-called secret motivation during these Finals.

That’s when Wade turned facilitator, a role James previously held while playing alongside Wade in the previous four NBA Finals. […] “But . . . Jordan/Karl Malone. Right?” Wade said of previous instances when Michael Jordan didn’t always get his due as Most Valuable Player, just as Golden State’s Stephen Curry beat out James for this season’s MVP. “We’re fans of the game. Michael Jordan, greatest in the game . . . Karl Malone, MVP. […] That extra chip. Did you need that extra chip? You’re playing against the league MVP, but we all know you’re the greatest player in the game. But did you need that extra chip?”

“I don’t think I needed it,” James said. “Every time I step out onto the basketball court, D-Wade, you know me, I want to be the MVP. I can’t say that I wasn’t upset finishing third [behind and Houston Rockets guard James Harden].” […] That’s when Wade interjected, “I knew you was.” […] But, James added, “I can’t say I was happy finishing third, but I didn’t need that extra motivation to put myself in this position today.”