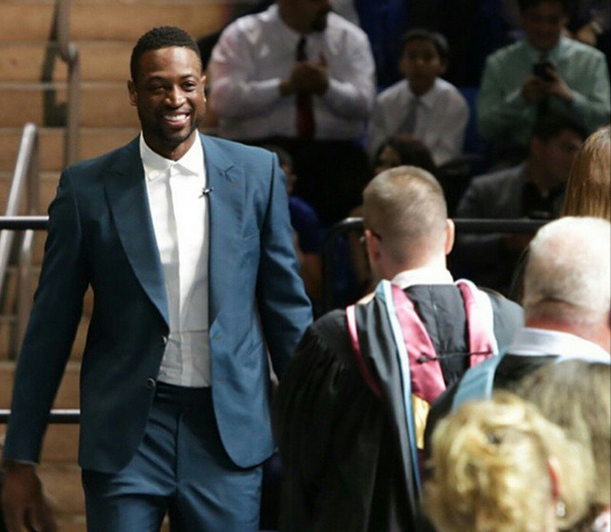 There’s no telling what will happen between Dwyane Wade and the Miami Heat this summer, but for one Florida high schooler in particular, Wade couldn’t be a bigger hero.

The Miami Heat’s loss proved to be Western High’s gain. […] With the NBA Finals getting under way without the Heat for the first time in five years, the All-Star guard had Thursday off and took advantage of the idle time to make a long-requested appearance at Western’s graduation at Nova Southeastern University.

Wade has made a habit of staying busy during prom and graduation season in recent years, at a time when the Heat were often playing deep into June. […] Two years ago he attended Archbishop Coleman Carroll High School’s senior prom in Miami with Nicole Muxo, a fan who made a YouTube video asking him to be her date. Earlier this year, he donated Hublot watches and custom-tailored suits to 15 foster teens from the Florida Guardian ad Litem program for their prom.

A letter from Fallahzadeh set Thursday’s process in motion. It read, in part: “I do understand this is during the NBA Finals and I want you and the Heat to win another championship. A rival school nearby to us, Cypress Bay High School, recently had Joe Biden speak at their graduation two years ago. That class of students were so lucky to have someone so influential to speak to them. It would be such an honor for our school to host you.”