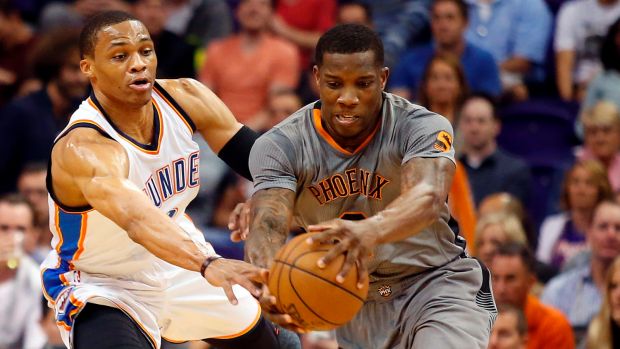 The point guard battle between Russell Westbrook and Eric Bledsoe was an epic one Thursday night — Russ earned yet another triple-double (the 13th of his career, and second in a row) with 39 points, 11 assists and 14 boards, but Bledsoe led the Phoenix Suns to a 117-113 overtime win against the visiting OKC Thunder.

Bledsoe fell just one assist shy of his own triple-dip, putting in 28 points, nine assists and a career-best 13 rebounds.

The Suns are now 1 ½ games behind the Thunder for the eighth and final Playoff spot in the Western Conference.

The Suns (31-28) had been winless in their previous four overtime games and gone 6-16 this season in games decided by five points or fewer but shut out Oklahoma City (32-26) for nearly 3 ½ minutes of the overtime period to end the Thunder’s seven-game winning streak.

“(Westbrook’s) explosive and he’s been playing out of his mind with tremendous confidence over the past month,” said Bledsoe, who played 42 minutes after playing 36 in Wednesday’s win at Denver. “We just tried to show that toughness. Hopefully, it rubbed off on everybody else, which it did. […] I want to win and win as a team. It’s not about one person. At the end of the day, I do feel like I’ve got a bigger load to handle now. I thought B (Brandon Knight) came along and took a lot of it off me and Markieff (Morris) as well.”