Flo Rida’s Manager Gets Kicked Out of Game 7 (VIDEO) 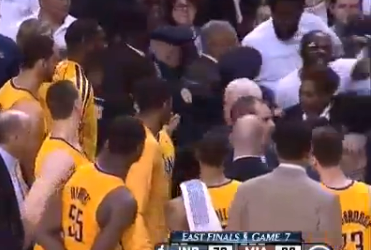 There was a lot more drama in the stands than on the court in Game 7 of the Eastern Conference Finals. After Norris Cole and Jeff Pendergraph were booted out late in the fourth quarter of the Miami Heat’s blowout 99-76 win over the Indiana Pacers, Flo Rida’s manager (seated courtside) lost his mind and was asked to leave by his boss. Per the Sun-Sentinel: “The rapper, who hails from Carol City, was seated near the Pacers’ bench for Game 7 of the Eastern Conference playoffs. Just as the Heat had all but locked up the win late in the fourth quarter, Heat point guard Norris Cole got into a heated spat with Pacers reservist Jeff Pendergraph. Cole was ejected with less than three minutes remaining. That’s when Flo Rida’s manager got into a verbal back and forth with Pendergraph, resulting in the officials ejecting the manager, according to Craig Sager’s report. Flo Rida was just one of several celebrities lining the sidelines Monday night. Also at the game were soccer great David Beckham and pop star Justin Bieber — who sported a blue and red hat emblazoned with the word ‘Heat.'”