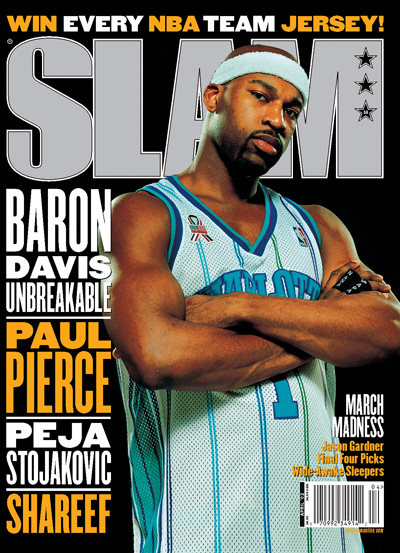 Baron Davis, while still electric at times, was once in the argument for best PG in the league. He’s built more like a stocky running back than a basketball player but he is/was lightning quick on his feet, had crazy handles, and could throw down some pretty emphatic dunks in the lane. He tore it up at UCLA and was drafted 3rd overall by the Charlotte Hornets in ’99 (after Elton Brand and Steve Francis). Davis backed up David Wesley and Eddie Jones his rookie season but started all 82 games the following year. He would continue to shine in New Orleans when the franchise moved cities but was then traded to Golden State in ’05 due to injuries and tensions with the coaching staff. He put together one of the best playoff series performances I’ve ever seen when he lead the 8th seeded Warriors to a 4-2 series victory over the No. 1 seeded Mavericks in 2007. After the ’08 season he signed with the Clippers where he currently plays. Davis is a 2x All Star with over 5,000 assists and 1,400 steals who still has a few more years left in the tank. With a healthy Blake Griffin, the Clips could definitely make some noise out West. Shout out to Dustin A for sending in the mix.

Have an old school video you want to see in FOTS? Send the video link to [email protected]