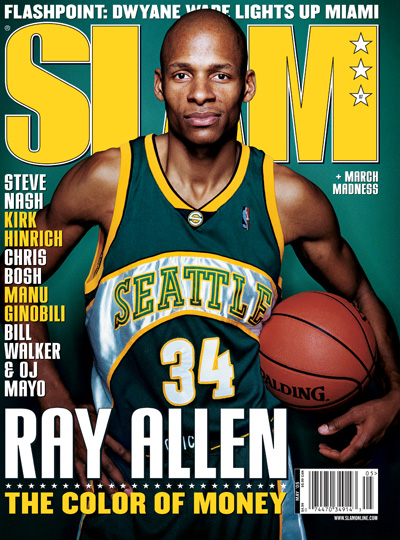 Greatest jump shot in the history of the game? Ray Allen gets my vote in a heartbeat. Drafted 5th overall by the T-Wolves in ’96, he was immediately traded to the Bucks for Georgia Tech PG, Stephon Marbury (drafted 4th). Ray was named to the All-Rookie 2nd team in ’97, improved greatly over the next few years, and helped make the Milwaukee Bucks a playoff contender with Glenn Robinson and Sam Cassell. Allen was traded to the Sonics for Gary Payton and Desmond Mason in 2003 and lit it up for 5 seasons out West before being traded to the Celtics in 2007. He is a 9x All Star, ranks 2nd all-time in 3-point FGs made (behind Reggie Miller), and has 1 NBA Championship with the Celtics in 2008. Allen has career averages of 19.9 pts, 4.2 rbs, 3.6 asts, and 2.3 3pt. He definitely still has some big shots left in the tank and I expect him and the Celts to finish no lower than 3rd in the East this regular season.

And, of course, He Got Game was the BOMB.

Have an old school video you want to see in FOTS? Send the video link to slamteam@harris-pub.com