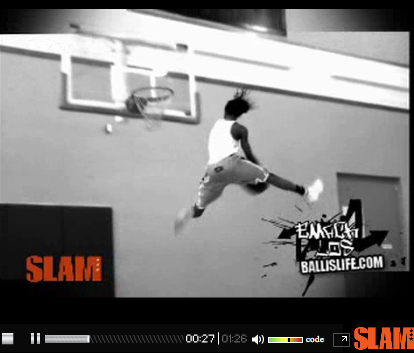 Every hoop head remembers when Vince Carter pulled an east-bay (dunk between the legs) in the NBA All-Star Dunk Contest. Every basketball fanatic remembers how ridiculous it was—how the air in our lungs exited like a punch to the gut. From then on, whether it was a gym in Sacramento, or the legendary Rucker court in N.Y., ballers worked day and night on how to escalate the dunk to new heights.

We have entered a new era in the Art of Dunk: NBA players are no longer the end all for best and most creative jams. In the 80s and 90s you knew with conviction that Michael Jordan, Clyde Drexler, Shawn Kemp and Dominique Wilkins were the best dunkers in the world. Contrast that setting to now. LOS, Emack, Mr. 720 and Team Flight Brothers could hold their own in any dunk contest with NBA elite.

Enter Carlos “LOS” Smothers and Eric “Emack” Robinson. Hailing from California, they are not complacent with a mere 40 inch vert-induced tomahawk. They work on reverse 360 windmills, reverse left handed east-bays, off-the-wall-rock the cradle…the list goes on for days. But they aren’t victim to the ever-growing statistic of players neglecting most of their game, only to work on athleticism. Carlos has a wet jumper from 20 feet+ with a quick crossover and has been on TV for the AND1 Mixtape Tour. Eric has a consistent midrange game with a good sense of tempo in the open court. Off the court, he also is a musician on the rise, with a hip-hop mix-tape out. If all else fails, they still have love for the game.