Greg Oden Plays and Dunks in First Game Since 2009 (VIDEO) 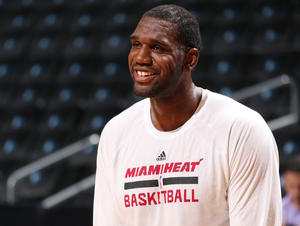 The emphatic dunk, Oden’s first basket in nearly four years, was greeted with wild cheers from his teammates, and the euphoria continued well past the 108-95 preseason win over the New Orleans Pelicans.

Oddly enough, Heat coach Erik Spoelstra wouldn’t allow reporters to interview Oden during the morning’s shootaround session and also dodged questions about whether Oden had been scrimmaging with the Heat in the last week. The reason for Spoelstra’s coyness became obvious after a timeout in the second quarter when Oden replaced Shane Battier in the lineup. Oden’s first appearance with the Heat came alongside (Chris) Bosh in the frontcourt. Also in the lineup with Oden were Mario Chalmers, Ray Allen and LeBron James. “Welcome back G.O.,” Heat owner Micky Arison tweeted after Oden’s stint in the second quarter.

Pat Riley, who spoke in Sioux Falls, S.D., on Tuesday evening, attended the Heat’s shootaround on Wednesday morning in New Orleans. “It was really great to see, his first game since 2009,” Riley said of Oden’s debut. “It was just a really great confidence builder for him. He’s not in shape yet but he’s getting there. We just have to keep him healthy.” […] “In December it will be four years, so four minutes is enough for me,” Oden said. “As long as I got out there and I walked off and I’m healthy that’s all that matters. Next step for me is coming in tomorrow and making sure everything is taken care of with my legs and making sure it gets back to where it feels good. And then I’ll be out there another game.”

Greg Oden played just three minutes and 59 seconds last night, but the simple fact that he was able to get out there and hoop was more than enough.

It’s an encouraging first step for the star-crossed center, and makes the NBA’s best team even scarier.