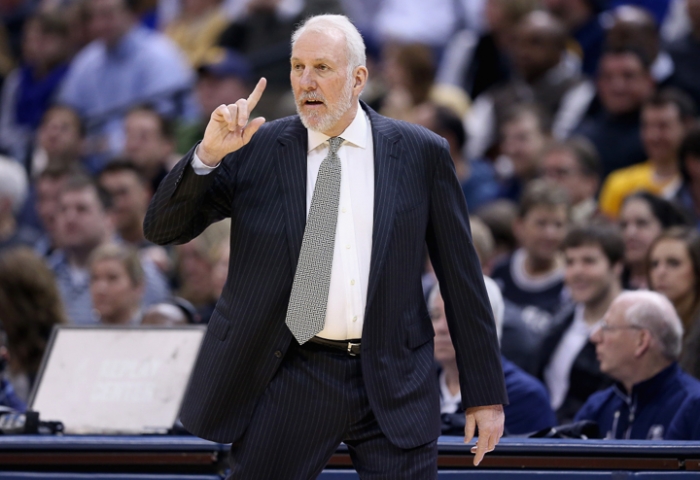 It was Gregg Popovich’s 1000th career victory, making him just the ninth coach in NBA history to reach the mark.

Gregg Popovich has more wins than 5 NBA franchises, 4 of which have been around longer than he has been a head coach pic.twitter.com/MZZTSE3zBh

Pop, as usual, downplayed his accomplishments.

It was a variation on “The Hammer” one of Popovich’s pet plays out of timeouts, usually with Manu Ginobili making the pass into the corner. […] With (Kawhi) Leonard as the passer, perhaps it should be called “The Claw Hammer.”

“It was the definition of a pounding-the-rock win,” said (Tony) Parker, the point guard who scored 11 of his game-high 19 points in the first quarter. […] “It was a great win for us. When we were down 14 at the start of the fourth quarter, it didn’t look good. We stayed together, we put some stops together, even though we couldn’t hit a shot. We were 6 for 25 from threes, but we got a big shot from Marco at the end.”

After Hill’s 3-point attempt bounced off the rim, Spurs assistant Ettore Messina gave Popovich a quick handshake, the closest the Spurs got to an on-court celebration. […] “I don’t do too much celebrating,” Popovich said. “I’ve been here a long time, and I’ve got good players. Getting the players is difficult, but I’ve been fortunate to have good ones, and the time is the most important element. You’ve got to be around for a while. It’s more a tribute to them than any coaches.”