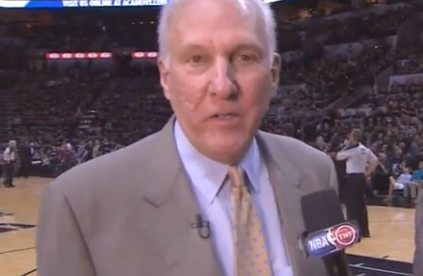 San Antonio Spurs head coach Gregg Popovich and sideline reporter Craig Sager have had an interesting relationship over the years. Pop was interviewed by Sager’s son on Sunday due to his father being in the hospital for Leukemia treatment, and delivered an emotional message of support. (Sager’s TNT colleagues honored him by rocking some of their pal’s throwback suits.) Per the Express-News:

Popovich was interviewed before the fourth quarter of the Spurs’ 90-85 victory over Dallas by Sager’s son Craig Jr., who was sent to San Antonio to take his father’s place during the broadcast on TNT.

The network had proposed taping a spot with Popovich and Sager Jr., but Popovich nixed that idea in favor of an in-game interview — the same manner he’s delighted in tormenting Sager over the years with terse answers and barbs over his flamboyant wardrobe.

Sager Jr. said he was nervous, but Popovich told him not to worry. Not only would Popovich take it easy on him, he had a hand-written message to pass on to Sager Sr.

“My dad thinks the world of (Popovich),” said Sager Jr., who borrowed one of his father’s custom outfits for the game. “He’s one of my dad’s favorite guys to be around and work with. He’s a genuine person and his players all love him.”