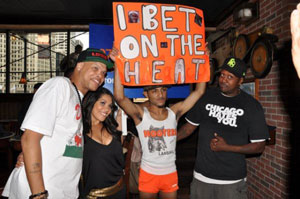 entire NBA. I have to give it to them; LBJ fans ride or die no matter what.

Case in point, my homie Sherm.

Sherm (@SHERMradio on Twitter) is a good dude who has an aspiring radio career here in Chicago. I’ve actually been on his radio show/podcast a couple of times to talk shop about basketball.

Not only is he a SLAM and SLAMonline fan who frequently visits the site, but he’s a HUGE LeBron James fan and was convinced—like a lot of people—that behind the awesomeness of LBJ, the Heat were going to take it all this season.

In fact, Sherm was so confident (especially on Twitter) that he made a bet with one of my other radio buddies, Leon Rogers (@LeonRogers) and his boy Tony Sculfield (@TheRealTonySco). Both are professional stand-up comedians who also host the hugely popular Morning Riot Show on the No. 1 urban radio station in Chicago, WGCI.

I’ll let Tony and Leon give you the particulars of the bet and then you can decide for yourself if it was a gamble worth taking.