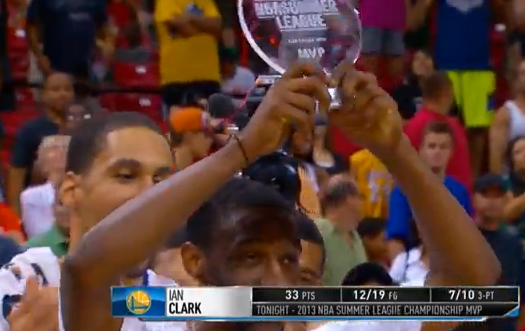 Behind Ian Clarke’s 33 points, the Golden State Warriors won the 2013 Las Vegas NBA Summer League championship, a 91-77 triumph over the Phoenix Suns. Clarke took home MVP honors. Per NBA.com: “Ian Clark is the essence of Summer League. The 22-year-old out of Belmont was the Ohio Valley Conference co-player of the year. He was a two-time defensive player of the year and a four-time all-conference selection. He never shot below 40 percent in a season from behind the arc. At the June 27 NBA Draft at Brooklyn’s Barclays Center, Clark’s name was never called. Undrafted and looking for his big shot, the unheralded, and mostly unheard of Clark — not Kent Bazemore or Draymond Green, but the 6-foot-3, 175-pound Clark — carried the Golden State Warriors, with seven 3-pointers and a game-high 33 points, to a 91-77 victory over the Phoenix Suns in the inaugural Summer League tournament championship game. […] ‘Hopefully,’ Clark said of making an NBA roster after besting his career-high at Belmont by one point. ‘I just wanted to come out here and play hard, and I think that’s what Summer League is for, to come out here and showcase your talents.’ Before the championship game, Clark had averaged 9.0 points, scoring 54 points in the previous six games.”