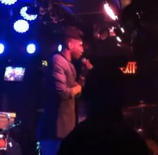 New York Knicks guard Iman Shumpert is a talented basketball player, but also a well-versed artist. Shumpert is known throughout NBA circles as a passionate writer and rapper. Earlier this week, the second year pro made an appearance at New York City’s Village Underground, paying tribute to his late aunt with a thoughtful poem.