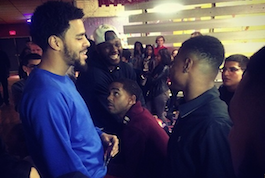 With J. Cole’s ‘2014 Forest Hills Drive’ just dropping (or being leaked) during basketball season, it’s only natural that plenty of hoopers are going to have reactions about his latest record. Cole’s hometown of Fayetteville also serves as home to the best junior point guard in the country: Dennis Smith Jr.

Over the weekend, the two were able to link up in Fayetteville for quite some time. The Dreamville records star invited his young basketball friend that owns offers from Duke, UNC,  to roll over to his house for a private listening party of the new album. From there, they hit up a local skating rink and engaged in some banter, ultimately culminating with the two going at it on the hardwood the following day (later Smith posted a video on Instagram of him blocking the rapper during a pick-up game). It seems as if the two immediately forged an immediate friendship, as seen by the video above.

We were able to catch up with Dennis Smith Jr. and he told us that J. Cole can really go on the hardwood, the advice that he offered him, and his personal thoughts on the album:

SLAM: I hear that you were able to link up with J. Cole over the weekend. How did that go?

Dennis Smith Jr.: It went well. He has a listening party in Fayetteville, which was great for the community. People came over and then we just chilled at his house to listen to his album before it released…or before it leaked out, unfortunately. He wasn’t at that, so they had me go meet up with him at the skating rink and that was the first time that either one of us had seen each other in person. We chopped it up a little bit there and planned a hoop session the next day, and he followed through with it. It was late on a Sunday night, but we got in the gym hooping.

SLAM: Tell the truth: Does he have game?

DS: Dude was actually solid. I can’t even lie to you. He’s about 6’4 and they had a couple of other good guys out there Mike, Eve, and RJ. They had Eve out there running point guard and he was dropping dimes like Magic. I think overall though, Cole was the best guy that they had.

SLAM: Since you listened to the new album before most of us, what is your favorite song off of the album?

DS: It depends on what type of mood that I”m in. In the morning time, I’d have to say January 28th. When I”m trying to get my day going, I’d have to say ‘A Tale of Two Citiez’. Overall, I’d probably have to say ‘Love Yourz’ because it has the deepest meaning.

SLAM: Much, if not all of J. Cole’s early music was talking about the grind and struggle of making it out of Fayetteville. How much do you think that his music transcends into your game?

DS: It transcends a lot. Being from Fayetteville, some of the stuff that he had to go through, I’ve had to go through. We’re pretty much cut from the same cloth. You’re right though, he pretty much talks about the grind in his early music. ‘The Come Up’ is the first mixtape that I’m hip to of his and every time that I go out and run early in the morning or get up shots, I let ‘The Come Up’ play all the way through.

SLAM: You mentioned that you were able to speak with him for a while. What was some of the advice that he gave you?

DS: Definitely about my grades and keeping them up. He was a smart guy growing up. He told me to stay focused on ball and then he asked me the main question that I’m asked from everybody: ‘What college do I want to go to?’