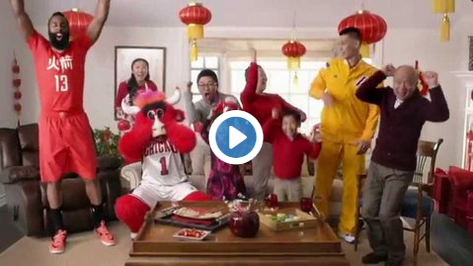 The NBA is celebrating the Chinese New Year this week, and debuted a commercial featuring James Harden and Jeremy Lin.

Thursday marks the beginning of Chinese New Year. Accordingly, the Houston Rockets and Golden State Warriors will be mixing up their attire to pay homage to one of the NBA’s most loyal fan bases. The Rockets will wear the special jerseys for the first time Saturday against the Toronto Raptors. The jerseys will also be worn on Feb. 23 against Minnesota and Feb. 25 against the Los Angeles Clippers.

Meanwhile, the entire league is active in the Chinese New Year campaign, with the Rockets’ James Harden and former Rocket Jeremy Lin appearing in this commercial that will debut Friday during ESPN’s Spurs/Warriors broadcast.